A Tribute to the Minnesota Fringe Festival 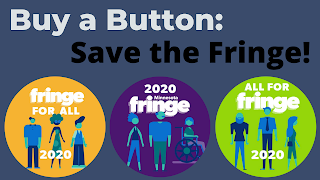 In the almost ten years that I've been blogging about Twin Cities theater, my theater consumption has increased exponentially, thanks in part to the Minnesota Fringe Festival. I've attended the fest every year since 2011, since 2013 with a press pass. I've seen a total of 300 shows over those 9 years, and it has become one of my favorite theater experiences of the year. The 2020 Fringe Festival (which would have been my 10th), has been cancelled due to the COVID-19 pandemic, and the Fringe needs our help to keep going through 2021. Click here to learn how you can support the Fringe by buying a $5 button and/or donating any amount you would like and are able to. 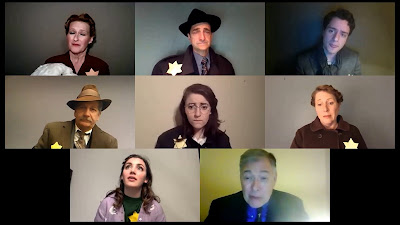 Out of all the streaming theater performances I've watched at home in the past seven weeks, none has affected me as much as Park Square Theatre​'s special zoom performance of their annual production of THE DIARY OF ANNE FRANK. This is their 21st year presenting this for student audiences, and I commend them for finding a way to get this ever more relevant and inspiring story out to students (and others) in such a uniquely moving way. It's really well done, with each actor emoting from their own separate little box, but somehow creating a cohesive story as if they were in the same room. The cast and creative team put much thought and care into their at-home costumes, lighting, and props, as well as the way actors appear and disappear from the screen. Anne and her family's horrific experience really puts our temporary isolation into perspective. I highly recommend it for your at home quarantimes (or anytime) theater viewing.