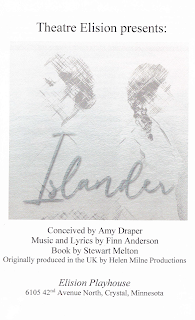 Theatre Elision could not have chosen a better piece for their post-covid return to the stage than the two-person a capella musical Islander, a recent hit from the Edinburgh Fringe Festival. And I could not have chosen a better show for my first time seeing a live performance inside a theater in 508 days (but who's counting?). Theatre Elision has been around for a little over four years and fills the niche of small-cast, one-act, rarely done or original musicals with a mostly female cast and/or creative team. They opened their new space just off Highway 100 in Crystal less than a year before the pandemic, and it's a lovely small venue that feels safe to return to with a masked and not too crowded audience. The feeling of being back inside the theater was indescribably wonderful and surreal. Islander is a brilliant piece of music-theater and just the kind of thing that Elision excels at. It's a sweet little story, fantastical yet grounded in characters that feel real, and musically gorgeous. The show runs for three weeks, longer than their usual short runs due to a reduced audience size, and I highly recommend you check them out and celebrate the beginning of the return of #TCTheater (click here for info and tickets).

Islander takes place on a small island off the coast of Scotland where the population is dwindling, there's no school and little work, and the people are under threat of relocation to "the big land." The young Eilidh (sounds like AY-lee) lives with her gram and spends her days wandering the beach, until first a whale, and then a potential companion named Arran wash up to make life a little more exciting. Not to spoil anything, what follows is a lovely tale of friendship, community, family, nature, and mythical stories.

The score (written by Scottish singer-songwriter Finn Anderson) is absolutely enchanting (you can listen to it here). Performed by a cast of two with no musical accompaniment, other than a looping device upon which the singers record and replay melodies, harmonies, and staccato sounds to create a fascinating soundscape, it has a traditional Scottish sound and a haunting feel.

Christine Wade (Elision's resident vocal director) and Emily Dussault (alternating with Deidre Cochran, because gone are the days of "the show must go on" regardless of the health of the actors) play Eilidh and Arran, respectively, along with multiple other characters that populate the island. They create some gorgeous layered harmonies and perform this intricate and complex score, that also includes pushing buttons and turning knobs on the looper at precise times, just beautifully.

Lindsay Fitzgerald directs the show and also designed the space, with gauzy fishing nets draped across the stage, a few pieces of aged wooden furniture, and mesmerizing video of the sea crashing against the shore playing in the background, but not overused. Despite the multiple characters, the scenes and story flow smoothly and understandably, with Emily and Christine distinguishing their many characters with a change in posture or voice. Speaking of, I'm no expert on accents, but I saw the show just after watching an episode of Outlander and listening to a podcast on the drive over featuring the Scottish Billy Boyd and his BFF Dom Monaghan, and the Scottish and English accents on this stage (dialect coach Jim Ahrens) sounded pretty great to my ears. The whole thing is a delight to the ears.

After I left the theater and drove home, it began to feel like a dream. Did I really sit in an audience with other humans, chatting with old friends, breathing the same air (through masks), watching performers sing, act, and emote right in front of us?! Something that used to be an almost daily occurrence in my life now feels new and strange, yet familiar. Or maybe it's just this show that induces that dream-like state, with its haunting music and well-drawn characters that make you believe in a world where islands move and magical creatures ride the waves protecting the earth and sea.