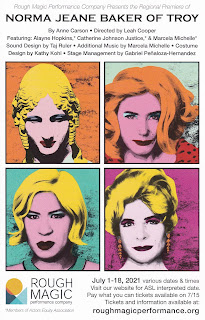 Rough Magic Performance Company has made a name for themselves at Minnesota Fringe Festival with their short, modern, and feminist adaptations of Shakespeare. But now they're moving beyond that by performing a new play outside of the Fringe. And literally outside* (thanks, covid), in the gorgeous space used by the Mill City Farmers Market, between the Guthrie Theater and the Mill City Museum. Norma Jeane Baker of Troy is a retelling of the legend of Helen of Troy, aka the face that launched a thousand ships, superimposed with the story of Norma Jeane Baker, aka Marilyn Monroe. The play examines parallels between the two women and attempts to look beyond their status as icons of female beauty to the truth behind the image. It's a fascinating play, beautifully produced, with a lot packed into the one-hour runtime. Even though I've been to a handful of outdoor plays and musicals this year and last, for some reason this really felt like my first return to theater as we once knew it. Maybe because I held an actual physical program in my hands, maybe because the stage and audience setup felt familiar, maybe because of the complex nature of the play. But for perhaps the first time in 16 months, I left feeling that familiar sort of theater daze, having just traveled to another world for a time, and not quite ready to settle back into this one.

Written by Canadian author Anne Carson, Norma Jeane Baker of Troy is typically performed as a one- or two-person piece (curiously, the Off-Broadway cast had a man telling this story). But Rough Magic has cast three female-identifying actors (Alayne Hopkins, Catherine Johnson Justice, and Marcela Michelle) who take turns in the storytelling. The piece naturally falls into three roles - Norma Jeane, a scholar telling her story from a podium, and everyone else (including Marilyn's husband Arthur Miller and friend Truman Capote). Dressed in identical white dresses reminiscent of the iconic scene from The Seven Year Itch (costume design by Kathy Kohl) with blond wigs, the three actors each spend some time in each of the three roles, passing the baton (or accessory) between them. The play is constructed as a series of scenes, or lessons, beginning with a Greek word. Between each "Norma Jeane enters" and "Norma Jeane exits" we see a scene of Helen, or Norma Jeane, or both of them at once. There are a lot of layers here, and sometimes it's hard to keep track of who's who and where we are. It's more like an abstract work of art than a realistic painting, appreciated for the impression it creates and the thoughts and emotions it evokes rather than a clear understanding of what it is.

Directed by Leah Cooper, all three actors give wonderful performances that are consistent enough to believe they're all variations of the same person/people, but  with their own unique flair as well (Marcella does a pretty great Truman Capote in particular). As they rotate between the three roles, they rotate to different stations in the performance space - a lectern with a notebook for the scholar, a fainting couch for Norma Jeane, and a table with a pile of props for the other characters. All set against the backdrop of a brick wall of the historic Minneapolis mill area. As props are used they're discarded into the space, so that what was neat and tidy at the start of the show becomes a litter of papers, hats, scarves, and other pieces. The actors are miked, their voices mixed with sound effects that help set the tone and location of each scene (sound design by Taj Ruler).

This play makes quite an impression in a short time, and left me wanting to know more about both Helen and Norma Jeane. It's funny and tragic and thought-provoking, an exciting expansion for Rough Magic Performance Company and a heartening step back into the world of really great plays.