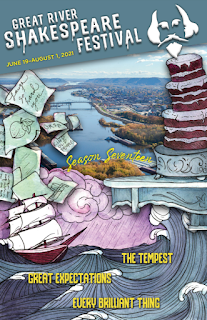 A true sign that our performing arts are back and stronger than ever, Great River Shakespeare Festival returns for its 17th season this summer, after taking a hiatus in 2020. It's a bit of an abbreviated festival this year, with only three shows instead of the usual four, all performed outdoors*, and no in-person additional events, conversations, or presentations. But it's still such a hopeful indicator that normal life is returning. I saw all three shows on a rare Minnesota July weekend that saw high temps only in the '70s, and it could not have been better. In a way, doing Shakespeare outdoors on the banks of the Great River is what this festival always should have been (although I don't think anyone will complain about a return to climate-controlled bug-free theater next year). And as we've seen so many theater companies do in the last 16 months or so, GRSF has taken the limitations presented to them in this situation and creatively used them to better the work. Perhaps even more so this year than ever before, a weekend vacation to beautiful riverside Winona (just a two-hour drive from the Twin Cities) to see some great theater is a wonderful idea for a getaway**.
The plays chosen for this festival all seem particularly relevant in different ways to the time that we're coming out of, and entering into. Themes of community, persevering through hardship, coming together again, and celebration resonate throughout the plays, performed by an excellent company of nationally renowned actors in rep. Two of the three plays are performed at a newly constructed wooden stage in Levee Park right on the Mississippi, built on and around an existing concrete fountain, with a few changes to make the two shows distinct (scenic design by R. Eric Stone). The audience is seated on three sides of the stage (bring your own chair) with great views all around. You're able to bring food and drinks to enjoy during the show (I recommend picking up sandwiches and cold drinks from Acoustic Cafe), and can even go get popcorn during intermission from the nearby movie theater, which makes for a relaxed picnic in the park atmosphere. The third play is performed in an open square on the University of Winona's beautiful campus, creating an intimate community feel.

Every Brilliant Thing by Duncan Macmillan and Jonny Donahoe

"Every Brilliant Thing invites us to participate in a ritual of togetherness." (director Andrew Carlson)

In this solo play, a man shares with the audience his life-long endeavor of making a list of "every brilliant thing." He started it as a child to cheer up his mom, who was hospitalized several times for attempted suicide. Of course, a child's sweet simple list can't possibly fix a complex mental illness, and this play deals seriously with suicide and depression, but not without humor. But the list became a throughline for this man's life as he left home, married, endured hardships, and later suffered a depression of his own. In his darkest times, the list would remind him of the little things, from ice cream to the smell of old books, that bring joy.

A unique facet of the play is that audience members read list items aloud when directed, and a few people are asked to come up on "stage" (just a concrete space in the middle of the audience) to play parts, as directed. Company member Michael Fitzpatrick performs the play and makes all of this seem easy and seamless; he's so present and reactive to whatever the audience gives him. By the end of the play it feels as if a trusted friend has just shared his life story, with all of the joy and pain that comes with it.

The Tempest by William Shakespeare

"The character I most identify with is Miranda, so full of joy and awe at people. Just people. People gathered together." (director Beth Gardiner)

The Tempest is one of those great Shakespeare plays that falls in the middle between the full-out comedies and the full-out tragedies, and has elements of both. Co-Associate Artistic Director Melissa Maxwell plays Prospero, the banished duke now possessing magical powers and living on island with daughter Miranda (Victoria Nassif). Prospero commands the loyal spirit Ariel (a nimble Benjamin Boucvalt) and resentful island creature Caliban (an earthy Gavin Mueller) to aid him in his plan to regain the dukedom by shipwrecking his enemies on the island, while securing Miranda's happiness with the sweet shipwrecked Ferdinand (Christopher Thomas Pow). It's fun to watch the antics, and to watch Prospero and Ariel watch the antics as they try to control the outcome. In the end Prospero decides that "the rarer action is in virtue than in vengeance."

This may be outdoor Shakespeare, but that doesn't mean the elements of production are any less. The costumes (designed by Rebecca Bernstein) are regal for the visitors, casual chic for the island dwellers, and fantastical for the fools. Elements of the sound design (by Scott O'Brien) enhance the other-worldliness of the creatures and add some music to the story. The play ends with a joyous moment of bubbles, easier to clean up than confetti, and creating a playful outdoor moment.

"I know I have been a bit bent and broken by the last year and its unexpected plot devices." (director Doug Scholz-Carlson)

As in all of the shows, the actors are playful and present, and bring gravitas to moments that require it as we journey through Pip's life in just over two hours. Ensemble members are dressed in black pants or skirt with suspenders and a gray shirt, over which wardrobe pieces are added and quickly removed to create the different characters. Props and set pieces are moved swiftly around by the ensemble to create the different spaces. It's a playful storytelling style with great attention to physicality and movement around the stage, that brings new energy to the classic tale of (as I wrote a few years ago) "a poor young orphan boy with great aspirations, whose dreams suddenly and too easily come true, who eventually learns there's more to being a gentleman than money and fancy clothes."

Great River Shakespeare Festival continues through August 1 with performances Tuesdays through Sundays. For other fun things to do in Winona between shows, which include hiking, shopping, eating, museuming, and more, check out Visit Winona.

*For a full list of all outdoor performances in 2021, click here.
**There are several hotels to choose from in Winona, but for the B&B experience, I highly recommend Carriage House B&B right across the street from campus. Super convenient location, quaint and clean rooms (which include a bottle of wine), delicious breakfast, and a chance to chat with other festival-goers over a delicious and filling breakfast (no need to find lunch somewhere). But be sure to book in advance, the festival is their busiest time of year.