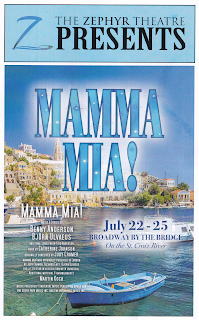 2021 is THE summer for fantastic outdoor* theater, and Zephyr Theatre's Mamma Mia! is high on that list. The Stillwater theater has been around for a few years, drawing top talent from #TCTheater, but this was my first experience with them. It will definitely not be my last. What's better than walking around charming riverside Stillwater, shopping, eating, and drinking, followed by outdoor theater performed on a stage with the St. Croix River and the historic lift bridge in the background?! In normal times they perform inside the Minnesota Zephyr Train Depot, but this summer they're opening their "Broadway by the Bridge" series with a show that's full of joy (as Artistic Director Calyssa Hall said before the show), Mamma Mia! Perhaps a bit of a guilty pleasure, this long-running hugely successful jukebox musical that spawned two movies (and counting) is so infectious with it's fun, familiar story-songs and heart-warming stories of female friendship and celebrating different kinds of families that you just can't help but love it. And this lovely and talented cast brings out all of the joy, fun, warmth, and humor of the piece, made extra specially poignant by the fact that it's likely the cast and audience's first return to theater after a very long extended intermission. That's a celebration in itself. The only downside of Mamma Mia! is that it runs this weekend only, and I do recommend buying tickets in advance (read: now) because it's close to selling out. Watch for the next "Broadway by the Bridge" in early August; I hear they're doing Shakespeare's As You Like It (dates and details TBA).
The show is performed on a stage set up in front of the river as if for a rock concert (but better - it's a musical!). It's tall enough for great sightlines in the large audience seated on plastic chairs (padding for the VIP section), and the set has multiple stairs with higher levels for even better viewing. We see that familiar Greek villa backdrop, with lots of colorful flowers, so that with the tropical weather we've been having and the water of the river in the background, if you squint your eyes it's easy to believe you're in Greece with Donna and her friends and family. Act I utilizes the natural light, and as the sun begins to set during Act II, the stage lights come on, so that by the closing number of the show the spinning disco ball sprinkles colorful light out into the darkness.
Zephyr has found a great Donna in Jen Burleigh-Bentz. She has a lot of experience with this show, having performed in Mamma Mia! on Broadway understudying several roles and as Tanya, as well as playing Donna recently at the Duluth Playhouse. She's such a natural, and so comfortable in this role and singing these songs. Yet despite having performed the material probably hundreds of times, she sings each song as if for the first time, exploring all of the emotional highs and lows of single mom Donna, watching her young daughter get married, and dealing with the return of three ex-loves. She's well-matched by Emily Scinto as her daughter Sophie, who orchestrates the reunion in an attempt to find her biological father. But what I love so much about this show is that in the end they discover that biology doesn't define family, love does, and a family can be however you choose to define it.
It's rare that I see a show not knowing who's in the cast, and I was pleasantly surprised at all of the familiar names I saw when I opened the program. The three dads couldn't be better cast - Sean Dooley is wonderful as always as Donna's love interest Sam, Charles Fraser is charmingly British as head-banger Harry, and Reed Sigmund is endlessly entertaining as world traveler Bill. His duet with the equally fantastic Lynnea Doublette as Rosie on "Take a Chance on Me" is so much fun it that it almost stole the show (including a pretty great pratfall by Reed, natch). The talented cast also includes recent returnee to #TCTheater Kristina Mitchell as Tanya, and one of Lyric Arts' New Voices Mitchell Douglas as the charismatic Sky.
Calyssa Hall directed and designed the show, and really accomplishes that feeling of joy and energy and movement. Choreographer Dorian Brooke has created some really fun dance numbers throughout the show and especially during the post-curtain call songs, which is kinda the best part of the show, and makes you want to join in. Music Director Jean Orbison Van Heel leads the on-stage seven-piece band and really brings these familiar and beloved songs to life.
It's been a really long and difficult 16+months, especially for artists and those of us who rely on artists for our sanity, and Zephyr Theatre' production of Mamma Mia! truly feels like a joyful celebration of the return of theater. If we all work together and get vaccinated, encourage everyone we know to get vaccinated, and wear a mask where required, maybe, just maybe, we'll really get through this and have a successful 2021-2022 #TCTheater season.
To everyone involved in this show, and all artists in general: