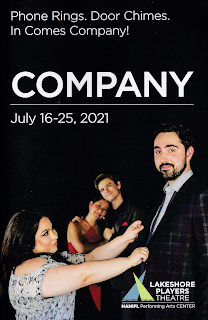 It's been a very long time since most of us have experienced this sort of company. Even an introvert who enjoys her own company is craving the company of other humans about now. And golly does it feel good to be in the company of a full audience enjoying a wonderful performance of Sondheim's Company, which is all about company, community, friendship, relationships, and togetherness. During the pandemic, White Bear Lake-based Lakeshore Players Theatre produced a number of new productions filmed for virtual viewing. But Company is their first live in-person show, performed on a very professional looking temporary stage in the large parking lot* behind the Hanifl Performing Arts Center (one of the benefits of theater in the suburbs - a free and spacious parking lot!). A gorgeous Minnesota summer evening, a talented cast, a Sondheim favorite, lots of company... what more could one ask for (other than a live band)?! The short run ends on July 25, don't miss it!

The 1971 Tony Award best musical winner, Company began as a series of short plays about married couples written by George Furth. When Stephen Sondheim came on board, it was turned into a musical and the character of Bobby was added as a central character tying all of the couples together. There's not much of a plot to it; it's more of a character study and an exploration of the ideas of marriage, friendship, and connection through a series of vignettes. Bobby is single and turning 35 amidst a bunch of married couples, and he spends time with each of them in turn, trying to figure out what it's all about. In typical Sondheim fashion, the songs are clever and witty and fast, with unexpected and beautiful melodies.**

The huge multi-level stage built at one end of the parking lot is all black (I heard someone comment jokingly that it was a boring set). The only set pieces are some black boxes and black chairs, constantly moved around to create different spaces. But this simple modern backdrop works for this collection of scenes that are almost outside of time, and with the addition of cell phones and chic, colorful, and character-specific clothing (designed by Bronson Talcott), you'd never know it was written in the '70s (although mixing up some of the gender roles would help modernize it further, something that the new Broadway production opening this fall will do).

As previously alluded to, the cast performs to a recorded track rather than live musicians, disappointing but understandable under the circumstances, and something LPT will hopefully remedy when they're back inside their gorgeous new theater for their 68th season. But despite that disappointment, the ensemble sounds great singing this complex Sondheim score under music director Bradley Beahen, with many familiar faces from other small but mighty theaters around town. Billy Krager is a fantastic Bobby, watching his couple friends with a bemused expression, and opening up with real emotion as Bobby has his revelation about life. Also great are Bradley Johnson (the Sancho Panza to Billy's Quixote in MVCT's lovely Man of La Mancha two years ago) and Lindsay Shimizu as the wealthy happily divorced couple; Lydia Wagner and James Lane as the couple that karates together; Kiko Laureano and James Person as the square but stoned couple; Audrey Johnson (delightfully frazzled and breathless) and Brendan Finn (one of Lyric Arts' New Voices) as the new bride and groom (or not); Wendy Short-Hays as the jaded Joanne who delivers Bobby his greatest lesson and Martin Swaden as her loyal husband; and Mary Palazzolo, Katie Rowles-Perich, and Abilene Olson as Bobby's exasperated girlfriends.

That's 14 people on stage, all at once or in smaller groups, and director Sara Pillatzki-Warzeha keeps everything flowing smoothly and the emotional core of the story consistent, while allowing the humor to shine through. Choreographer Joey Miller has created several charming tableaus of the ensemble, with some fun choreography that helps define the characters. The group really works together well in this true ensemble piece that allows each of them a moment or more to shine, and it's great to see so many people together on a stage again.

For Bobby, it's his 35th birthday that makes him contemplate who he really is and what he really wants in life. For many of us, a global pandemic has brought us similar revelations about our life choices. Which makes Company a perfect choice for this transitional summer. But it's not an easy choice, and this company did a terrific job with it under less than ideal circumstances (crickets as a constant backdrop, a really loud boom mid-performance from which they smoothly recovered, increasing July temperatures). It's a great way to close out this unusual season, which they call Season 67 3/4, and I look forward to what they'll do with Season 68.

*For a full list of all outdoor performances in 2021, click here.
**Plot summary borrowed from what I wrote about previous productions I've seen.