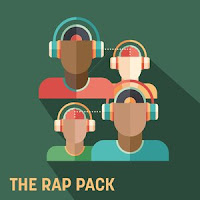 With so much summer outdoor live performance going on right now (click here for a full list), I almost forgot about Theater Latte Da's Ghostlight Series of virtual cabarets. Beginning in January, when things were still pretty dire in the pandemic world, they began releasing 30-minute virtual cabarets, with a new one coming out about every other month. They released the fourth show a few weeks ago and I watched it over the weekend. It's so different from the other shows, which have all been unique, and it's so much fun. The Rap Pack features a group of the same name, consisting of rappers GQ (Gregory Qaiyum), JQ (Jeffrey Qaiyum), Jax (Jackson Doran), and Pos (Postell Pringle). Their show is an engaging mix of comedy and hip hop done in that famous "Rat Pack" style.

The show consists of several different numbers and an intro section, in which we learn about how the group came together and one of their first projects, Othello: The Remix, which they preformed at numerous places including Edinburgh Fringe and Shakespeare's Globe. The songs for this show were recorded in the Ritz Theater, in homes, and on the streets (videography by Lucas Wells), creating a varied look for the show. Topics covered include what jokes are too soon, being old, and Minnesota's slippery winter sidewalks. It's all very fast and funny and clever, and the half-hour show flies by way too quickly.

If you've missed out on this excellent series, you can still subscribe to it, watch these four shows now, and the fifth when it's released. The other shows in the series include: