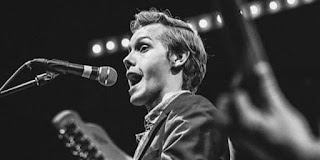 Back at Crooners Supper Club's new outdoor venue The Belvedere for the 5th time this year, I saw a remarkable collection of showtunes performed by a remarkable group of #TCTheater artists, and it healed my soul a little after this long theater-less time. What really stood out to me, beyond the fact that each one of these performers is a superstar, is that musical theater can truly convey the full range of human emotion. And we went through all of it last night, from laughter to tears and everything in between. It's been quite a year for all of us, and An Evening of Show Tunes with Tyler Michaels King and Friends provided a cathartic release as well as a hope that we will come out of this stronger and better, and soon. Click here for a full list of shows at Crooners (including two indoor spaces as well), and if you missed Tyler and friends this week, you have another chance to see them again on August 26.

From the opening number, Jason Robert Brown's "The New World," with the ensemble passing the lead between them and finishing with some chill-inducing harmonies, I knew this was going to be a special night. As Tyler noted, while his name is in the title, it truly was an equal concert by him and his friends Ben Dutcher, Kate Beahen, China Brickey, and John Jamison, accompanied by Louis Berg-Arnold on piano. With a theme of quarantine and coming out of it, the song selection was on point. Good musical theater songs are a little story unto themselves, and they picked a couple dozen great ones. Each performer sang a few solos, which provided insight into their experience this past year, all performed with so much emotion you'd think they hadn't sung in front of an audience for a year!

There were silly songs (the hilarious duet "A Stud and a Babe" performed by Kate and Tyler, one of several incredible duets), gut-wrenching songs ("She Used to Be Mine" performed by China - note to all #TCTheaters, cast her in the regional premiere of Waitress!), and everything in between. In a night of many highlights, the one that stands out is John's performance of "I'm Here" from The Color Purple, a song that gets me every time with its message of hope and self-love, but never more so than this version. As he finished the song with tears streaming down his face, having just bared his soul, he received an instant spontaneous standing ovation, with not a dry eye in the tent. Such is the power of music-theater, especially when performed by such gifted artists as these.

And now the songlist, which is pretty Sondheim heavy, and I'm not mad about that (no I didn't know all of these songs, I had to google several of them).

Just about a year ago, a version of this show was my first return to live performance after Covid shut everything down in March. I saw several shows at Crooners' makeshift drive-in outdoor venue last year, which was a real life-saver. It's hard to believe that a year has gone since then, hard to make sense of everything that has happened and where we are now. But I know I'll be looking to theater, and music-theater in particular, to guide me in this new world.

*For a full list of all outdoor performances in 2021, click here.
**Lakeshore Players Theatre is doing an outdoor production of Company in the parking lot outside of Hanifl Performing Arts Center in beautiful White Bear Lake, opening next week. Click here for details and tickets.