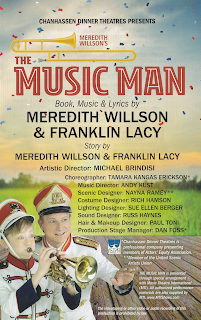 Chanhassen Dinner Theatres opened their production of The Music Man in early March of 2020, when I was out of town on vacation in paradise, aka New Zealand. I was scheduled to see it mid-March when I returned, but we know how that story goes. Fast-forward through 16 long months to their re-opening a few weeks ago, and I was finally able to see the show. It was only my second time inside a theater since I left town in late February of 2020, and my first large-scale musical with a full house. I attended with my mom, aunties, and cousins, and in the middle of the first act one of them leaned over to me and said "it's so good I can hardly stand it!" I couldn't agree more. It was a very emotional experience for me, watching a huge group of talented performers (many of whom I've watched on stage for years) doing what they do best, with a few hundred people in the same space experiencing it live. Something that I used to take for granted, but no longer will. And I can't think of a better show with which to return than The Music Man, a celebration of the importance of music, community, connection, and working together towards a common goal, all things that have been sorely missing of late. It's a fantastic production from start to finish, and such a joy to be back. Tickets are on sale through the end of the year, so make your plans to visit River City!
Much of the 2020 cast returned to the show, but since a lot can happen in 16 months, not everyone did, and about a third of the 30+ actors are new (per this StarTribune article). And I would guess that this year's cast is more diverse than last year's due to CDT's recent and much needed work around diversity, equity, and inclusion (read their statement here), something I hope they will continue with their next show. But what hasn't changed is that this cast is hugely talented, from the smallest actor to the tallest. Michael Gruber, a #TCTheater favorite with multiple Broadway credits, is so charismatic as the titular Music Man (a role he played in Artistry's 2017 production, which he also choreographed), it's easy to see why River City falls so easily for his charms (one of my aunties even commented that she liked him better than Robert Preston!). Ann Michels has played the lead in many musicals around town, from Victor/Victoria at Artistry, to White Christmas at the Ordway, to my favorite, the locally created Sweet Land at History Theatre, and she's always such a joy to watch and listen to. As Marian, she transforms from the stern and grieving librarian to melt under Professor Hill's attentions as she sees the hope that he brings to her family and town. Michael and Ann share a prickly, then sweet, always believable chemistry.
Other highlights in the cast are too many to mention but to name a few: Mary Gant as the warm and tough Mrs. Paroo; Tony Vierling as the professor's old buddy, with a really fun tap duet between the two; Tod Petersen continually cracking me up as the outraged malapropism-spewing mayor; the dreamy barbershop quartet of John-Michael Zuerlein, Shad Olsen, Reese Britts, and Evan Tyler Wilson; and Jon Michael Stiff and Delaney Hunter leading the younger generation in some terrific high-kicking energetic dance numbers (choreographed by Tamara Kangas Erickson). Director Michael Brindisi moves the large ensemble around the space crisply, hitting the right notes of humor and poignancy (I teared up on several occasions), and everyone in the cast is so present and in-character even in the deepest part of the background.
As always, the on-stage (hidden behind a scrim) band sounds fantastic under resident Music Director Andy Kust, and you just can't beat 30+ voices joined together on some of the most beloved musical theater songs. The early 20th Century costumes (designed by Rich Hamson) are simply scrumptious, with dapper suits for the men and flounces, bustles, ribbons, and frilly hats galore for the women. Simple, elegant set pieces are smoothly moved on and off stage against the colorful backdrop; my favorite are the library chairs and tables on wheels built of stacks of books (designed by Nayna Ramey), with all of the pieces coming together to create a cohesive and inviting River City.
The Music Man is scheduled to run through the end of the year, and if we all do our part by getting vaccinated, encouraging everyone we know to get vaccinated, wearing a mask where asked (not required for patrons at the Chan although the staff do wear them, and other theaters and large venues around town may require them), then hopefully the show can continue without another extended intermission like the one we just went through. Because if The Music Man teaches us anything, it's that a band can save the town, i.e., that music, dance, sharing stories, coming together to make and experience art is a vital part of our economy and our lives.