"Xanadu" by Duluth Playhouse at the NorShor Theatre 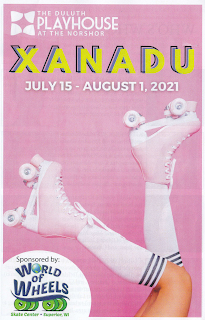 I've been to the North Shore four times in the last 14 months. During a time when my two favorite things posed a serious health risk - theater and travel - I travelled locally, Minnesota State Parks permit in hand, or rather, on my car. Now that things are starting to look brighter (but only if we continue to vaccinate and follow masking guidelines), I was able to combine my two favorite things. Duluth Playhouse is back and I just happened to be in town for closing weekend of their production of Xanadu. It's such a fun show that's so silly and ridiculous, but its themes about "the human experience rendered comprehensible through art" and a magical place defined by love and creation are really quite poignant right now. This talented young cast fully embraces the joy and camp of Xanadu, making this a celebratory return to theater. This production has closed, but they've got a full schedule of shows planned both at the beautifully restored NorShor Theatre and at the smaller edgier Underground Theatre. If you're planning a trip to the North Shore, visit their website to see what's playing.

The 2008 Tony nominee Xanadu is not just an adaptation of the 1980 disco roller skating movie starring Oliva Newton John, but also a loving spoof of it. The movie (which I just watched for the first time recently) was a flop at the box office, but a success for the soundtrack. While the movie seems quite earnest and takes itself very seriously, the musical knows what it is and embraces the silliness of this story about a muse visiting an LA artist whose dream is to open a roller disco - the pinnacle of art. The plot involves some shenanigans by the sister muses and an older businessman rediscovering his youthful passion for art, having previously been visited by the same muse. But it's all really just an excuse for these fabulous early '80s songs, self-referential jokes (oh the Andrew Lloyd Webber of it all!), and roller skating!
Directed by Producing Artistic Director Phillip Fazio, the nine-person cast consisting mostly of current students or recent graduates of the University of Minnesota Duluth really leans into the campy tone of the show. Kelly Killorin is fantastic as the muse Kira and a natural on skates, which she wears for the majority of the show, except when she's tap-dancing (a new kind of triple threat). Stuart Gordon is sweet and funny as the dense artist Sonny, and the two are quite cute together. Michael Kraklio is convincing as the businessman who finds his inner artist; Quinn Lorez and Maddie Schafer provide much of the humor as Kira's mischievous sisters; and the rest of the sister muses (Patrick Timmons, Thressa Schultz, Haley Methner, and Eric Romero) are delightful as they float around the stage, speak in unison, and also double as other roles in the show.
The set has an '80s look, with ramps instead of stairs for all that roller skating. I'm obsessed with the sister muses' Grecian inspired dresses in pastels or jewel tones, all slightly different and beautifully fitted to each actor, complemented by gold sparkly tennis shoes and gold armbands (costume design by Peg Ferguson). The fun disco choreography is accomplished both on skates and on feet (choreographed by Amber Burns), as Kyle Picha leads the four-piece pit orchestra on this totally awesome score.
According to their Facebook page, "founded in 1914, Duluth Playhouse is one of the oldest, continuously running, non-profit theatres in the country." That's rad, and I'm sorry it took me this long to finally see one of their shows. I'll now be adding them to my Duluth theater list (along with Renegade Theater Company, which is also back open). So the next time you're in Duluth, after spending the day at the lake, go see a show!