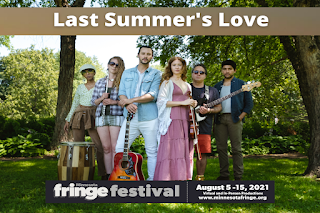 Summary: A sort of concert version of a new musical about star-crossed lovers.

Highlights: The show is chock full of incredible songs, in a sort of indie-folk-pop style. A very loose and not very original story ties the songs together, in which a man and woman fall in love despite being in relationships. The man moves to California and they try to move on, but they can't forget "last summer's love." I would love to see the story fleshed out a little into a true and full musical, but right now it's all about the music, which is really great. Watching the show feels like being at a concert; the cast (Adri Mehra, Cherelle-Renee Childs, Sylvia Michels, Elliott Graber, Ninchai Nok-Chiclana, and Jack Bonko) performs with mic stands in a traditional band set-up, and are loose and playful as they engage the audience with banter. The cast also doubles as the band, with most of them playing instruments, in that great tradition of Once (of which this show is a little reminiscent) where there is no separation between actors and musicians, between story and music. Both of the leads (Sylvia and Elliott) just shine on stage, very appealing with gorgeous vocals that blend well together. The space in the distillery is very hip, strewn with tapestries and hanging lights, and a cute baby blue vintage bike that is featured in the lyrics and story. The Fringe isn't the Fringe without a new musical, and this one prettily fills the bill, the perfect ending to what has been an entirely satisfactory, if smaller and less exciting than usual, Minnesota Fringe Festival.