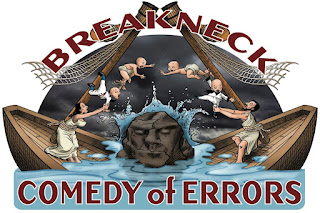 Summary: A one-man one-hour retelling of Shakespeare's wacky tale of twins - The Comedy of Errors.

Highlights: Timothy Mooney, who also brought us Breakneck Hamlet at the 2015 Fringe, among others, now brings that breakneck speed through a full Shakespeare play to the virtual world. It's no less impressive, perhaps even more so, because now he only has the change of hat or wig, along with voice and facial expressions, to create all these different characters, rather than a full performance space. Scene by scene, he leads us through the ridiculous story of two sets of twins separated at birth who by happenstance are reunited with each other and their parents (soap operas got nothin' on Shakespeare). He also manages to provide historical background to the story, and most amusingly, commentary on the story, characters, and dialogue. In a weird way, it's actually a great and accessible way to be introduced to or gain more understanding of a Shakespeare play. An this one in particular, with all it's mistaken identities and plot twists, is particularly fun. One look at the detailed show image should tell you that.