Zephyr Theatre's ShakesFaire - "Shakespeare LOL" and "As You Like It" 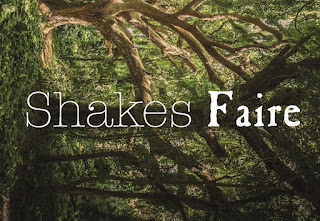 I'm interrupting this Fringe coverage to bring you news of FREE Shakespeare in the Park! Stillwater's Zephyr Theatre is presenting three shows as part of their annual Shakespeare festival, held in lovely Valley View Park just outside of Stillwater. I saw two of the three shows last night, the first of only five performances this weekend only. It's a gorgeous location with a natural and partly shaded slope for audience viewing (bring a chair or blanket), and really fantastic performances of these two great shows. Read on for more about Shakespeare LOL and As You Like It, then make plans to head out to the park this weekend to enjoy some great outdoor theater, which also includes a puppet show by Open Eye Theatre. Click here for details, but reservations are not required (although donations are accepted).

My evening started at 5pm with Shakespeare LOL, "a compilation of Shakespeare's funniest scenes" by #TCTheater artist Pat O'Brien (whom you may also recognize from TV shows like Saved by the Bell), who also directs and acts in the piece. If you're a regular theater-goer, you most likely are familiar with these scenes from some of the most produced Shakespeare plays A Midsummer Night's Dream, Two Gentlemen of Verona, The Taming of the Shrew, Twelfth Night, Romeo and Juliet, and Hamlet. But you don't need to be familiar with these plays to enjoy witty banter, shenanigans, and jokes. Matt Saxe plays the Bard, quill in hand, wordlessly directing the scenes, almost as if they're coming to life as he puts quill to paper. The fabulously talented ensemble (also including Craig Johnson, Winifred Froelich, Alex Galick, Ryan Nelson, Allison True, Ali Daniels, Jaclyn Mack, Max Savage, and Adam Fielitz) plays multiple roles and are all obviously having a great time with the show. I also appreciate how in each play fragment, actors wear internally consistent costumes, from the athleisure of Shrew, to the modern business-wear of Hamlet's parents, to the Elizabethan garb of R&J, to the familiar Rude Mechanicals cast of characters (with Ryan Nelson reprising his impersonation of a certain ex-president). The 70-minute show ends with Puck's endearing speech (heartfully delivered by Pat O'Brien), that is oh so poignant after a very long extended intermission.

The main event of the Faire is As You Like It, which, in case you're not familiar with it, goes something like this: the new duke has banished the old duke, his brother, to a life in the forest. The two dukes' daughters are best friends, so the new duke lets Rosalind keep his daughter Celia company, until she, too, is banished. The young women decide to run away together, in disguise of course, with Rosalind dressed as a man. They take the fool Touchstone with them for company and entertainment, and as usual the fool gets the wisest and most entertaining lines. They run into a bunch of forest dwellers, shepherds, and the like, including Rosalind's crush Orlando. Orlando is also crushing on Rosalind, carving poems and love letters into the trees of the forest. Rosalind in disguise convinces Orlando to woo her as Rosalind, you know, for practice. Eventually everyone's identities are revealed and everyone gets their happy ending.*

Eva Gemlo and Sara Marsh lead this huge and talented cast as the banished Rosalind and her cousin Celia, respectively, and share a really believable chemistry as cousins/sisters/BFFs. Both are so open and playful, as is the entire cast, which also includes Alex Galick as the young lover Orlando; Neal Beckman as his devilish brother; Michael Quadrozzi as a hilarious Touchstone; Kirby Bennett as the regal banished duke; and Randal Berger as Jaques, with an excellent delivery of one of Shakespeare's most famous monologues, the seven ages of man ("all the world's a stage..."). And if that's not enough, he also directed and designed the show.

One of the fun things about As You Like It is the use of music; the character of Amiens is a musician in the banished duke's court, here charmingly personified by Mike Tober playing guitar and singing an eclectic selection of pop love songs mostly from the 20th century. This sets a light-hearted tone for the show, which has a steampunk design, because, why not? The main set piece is an extremely impressive machine with gears and cranks that emits literal steam whilst displaying rotating signs to specify the location of the scene. We leave the steampunk costumes behind as we enter the forest, its dwellers dressed in more appropriate forest wear (costume design by Jaclyn Mack). To complete the picture, an adorable live sheep makes several appearances, led by around on a leash by Charles Fraser as the shepherd.

This is only my second experience with Zephyr (after last month's super fun Mamma Mia! in downtown Stillwater), and so far I'm very impressed with their work. I love that they're presenting these shows free; it's such a fun, accessible, and family-friendly atmosphere. Between shows you can walk around the park, or enjoy the eclectic array of donation-based concessions, which may include delicious pie from sponsor of the show, Joseph's Restaurant. Or bring your own food and make it a picnic. It's truly a perfectly lovely and joyful outdoor theater event.

*Plot summary borrowed from what I wrote about Classical Actors Ensemble's production a few years ago.