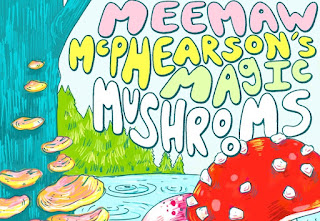 By: Brick by Brick Players

Summary: A family returns to their favorite cabin in the woods after the death of their father/husband/son, and it's complicated.

Highlights: This is a great family dramedy created by young artists (playwright Grace Ward, director Hadley Evans Nash) that features a multi-generational cast. We have the titular Meemaw (Kathleen Winters), mother of the deceased; the newly widowed Peggy (Gina Sauer); her teenage daughters Burgundy (Simone Reno) and Lily-Pearl (Sarah Anne Munson); prodigal son Roper (Timothy Kelly), who shows up with new girlfriend Lena (Gillian Gaunt) in tow; and camp employee Toby (Dan Patton), whose known the family for decades. To say they have issues is putting it mildly. Peggy mourns her husband, but cheated on him; Meemaw resents Peggy for changing her son; the girls are thrilled to see their brother, yet resentful that he's been away so long; and Lena is just trying to fit into this family unit. They argue, they run away, they see Big Foot and a puppet show in the woods, but in the end this family loves each other and is there for each other, even when it's hard and messy. The engaged and present cast really feels like a family, and although it's not a musical, music is incorporated nicely into the storytelling. Bonus: the setting is gorgeous in a pretty little park on the Mississippi.