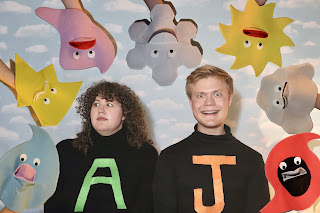 Summary: A delightful spoof of true crime documentaries that features gruesome murder of puppets on the set of a local cable children's weather educational show.

Highlights: I loved this group's show at the virtual Fringe last year, the sweet and poignant children's grief counseling session, so I was eager to see more of their work. This doesn't bear much resemblance to last year's show, except for the clever concept and spot-on execution. With deadpan seriousness, a true crime documentarian (voiced by Claire Chenoweth) investigates multiple murders that happened in 1999 on the set of a children's puppet show called Wuppet Time (a questionable show that cheerily warned children about snow-related disasters and head trauma from falling staircases). Like any good docuseries, it has interviews with survivors, found footage of events, and people obsessed with the crime who have tried to piece together what happened on that tragic day. The truly funny and absurd thing is that the weather puppets in the show (played by Claire Chenoweth, Gillian Gauntt, and Matthew Humason) are treated as people - the victims and possible perpetrators of the crime. Watching a jaded puppet of a raindrop smoking a cigarette as they reminisce about a tragic event in their youth is just ridiculously amusing. As are the two humans in the cast (played by co-creators Rachel Ropella and Timothy Kelly), one of whom is a controlling jerk with anger issues, the other of whom tries to share the nuance of the situation. Like Avenue Q, casting these sorts of familiar human dramas in puppets just makes everything funnier.