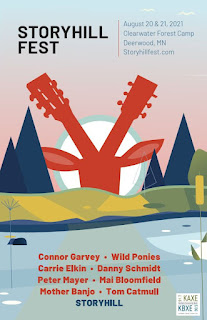 On the Monday of Labor Day Weekend of 2014, I drove away from Storyhill Fest at Clearwater Forest Camp, as I had the previous four years, but this time not knowing when I would return. What used to be an annual festival was no longer going to be a regular event. It took seven years (including one pandemic postponement), but this year we finally returned to the idyllic folk music festival in the Brainerd Lakes area of Minnesota. And in the weird way that time and memory work, it felt like I had never left. Settling into my dorm-like room in the lodge, walking the beautiful hiking trails on the grounds, going for a swim, sitting around the campfire (faux this year, because drought), and most of all sitting in a camp chair on a warm (or cool, because Minnesota) late summer day listening to an array of incredibly talented singer/songwriter/storytellers, it all felt so familiar, so real, so right. It felt like coming home, like coming out of a long drought, not of rain but of performing arts. As one of the performers said, we're not out of the woods of this pandemic yet, but for a few days, in this one place, we all came together (with appropriate safety protocols) to share and celebrate music and humanity. Storyhill Fest is held at Clearwater Forest Camp near Deerwood, MN. In addition to the music, the two-day festival (with an additional pre-fest night for VIPs like yours truly), is filled with all of the typical Minnesota summer activities - swimming, kayaking, hiking - plus some special activities like songwriting workshops or crafting sessions. It's a gorgeous location in the woods on a lake, with lodges and camping available on-site for that intimate community feel. The Woods provided delicious food options for the weekend, so festival-goers have everything they need right on site.
Performing at the festival were a close-knit group of artists who have crossed paths over the years at festivals around the country. Most of them don't call Minnesota home, but such is the life of a troubadour that when a respected colleague like Storyhill calls, they jump on planes or get behind the wheel of their cars to show up and sing. They truly feel like family, and the best part of the festival is when one (or a half dozen) of them hops up on stage to back up whoever is performing. They're all great as solo artists, but there's nothing better than when artists combine their unique talents to create a transcendent moment of music. Read about each of the performers below, and click on their name to be taken to their website to find out more about them, including how to buy their music or watch they perform, both virtually and in person.
Chad Elliott
I was unfamiliar with Chad and his music before hearing him play at the campfire on the first pre-festival night. Brought in as a last-minute replacement for the first set of the festival, he set the bar high for the weekend. With an authentic lived-in voice, his songs convey emotion and story, and are relevant and relatable, like good folk songs should be. In addition to being a soulful singer, the Southern Iowa native is also a painter (you can find his paintings here).

Mother Banjo
I'm not sure how Ellen Stanley got to be the mother of all banjos, but it's a well deserved title. Warm and earthy, she sang covers (including a U2 song) and originals whilst playing the instrument from which she gets her name, accompanied by one of her band-members Tom on guitar. Great songs with a sweet and gentle sound, including a very appropriate song with the lyric, "I don't worry about the weather, the weather will do what it wants" (as it did on Day One, but we managed to get the music in between raindrops).
Carrie Elkin
Carrie and with her now husband Danny, who sang on Day Two, have been at almost every Storyhill Fest I've attended, and are an integral part of the experience (and now come with a sweet little girl dancing around in front of the stage). Carrie's incomparable spirit is as much a presence at the fest as her gorgeous voice. She sings with her entire heart and soul, and then she lets loose the full power of voice. She sings with such real emotion that she brought herself to tears singing a new song, along with everyone listening. That's how connected she is to her music, her performance, her audience. She closed her set with her signature a capella (and unmiked at the end) rendition of "Amazing Grace," a simple showstopper.

Connor Garvey
Connor sounds like he's singing with a smile on his face. Listening to his music just brings me joy. He opened his rain-shortened set with a little ditty about being back, with lyrics that include Storyhill song titles, a delight to the crowd. A regular at this festival, he sang some old favorites ("The Bird"), along with some new songs he's written in the last seven years (some inspired by his time on a ship from his home of Portland, Maine to Iceland - what artists will do for inspiration!). He brought along his friend, mandolinist Tom Murphy, who backed up many of the musicians. I'm convinced he can play along with anyone to any song, whether he's heard it before or not.
Tom Catmull
A Texas native who now lives in Missoula, Tom is as good of a storyteller between songs as he is in his songs. He's funny and charming, a total natural on stage as he sings songs of "country, folk, pop, shuffles, waltzes, rock and some songs designed specifically to ear worm ya." An easy-going and fun set to start Day Two of the fest (that was at least 15 degrees cooler than the day before).Mai Bloomfield
I was first introduced to Mai's ethereal voice and spirit at the campfire. The LA based singer/songwriter/guitarist/cellist has worked with a lot of big names, but you wouldn't know it. She's humble, down-to-hearth, and totally open-hearted. Her songs are full of hope and life, despite exploring heavy tops like her cancer diagnosis nine years ago and the recent death of her mother, like a ray of light in a dark world.Danny Schmidt
Danny jokingly described his set as a typical Minnesota conversation - talking about the weather, then family news, then some passive aggressive politics. He's an incredibly smart, thoughtful, and insightful songwriter, whether he's writing about his disdain for summer, life in a pandemic, or the murder of George Floyd; his songs are like complex poetry. His poignant song "Company of Friends" (which Carrie sang with a bunch of artists) has become an unofficial anthem of the fest.Wild Ponies
Previously appearing at the 2012 Storyhill Fest as Doug and Telisha, this super cool married couple from Virginia (now based in Nashville) sings duets and plays guitar (him) and upright bass (her), dressed in a cowboy hat (him) and rhinestones (her). They have a fun rapport on stage and harmonize well together as they trade the lead back and forth, with a really authentic sound.Storyhill
Being the headliners, Chris and Johnny performed at the end of each night of the festival (see their set lists here). I've only been a fan of Storyhill for about 14 of the 30+ years they've been singing and playing together. A lot of their fans have followed them since their days touring Minnesota colleges in the 1990s, but I became aware of them thanks to the dear departed MPR Morning Show when they released their eponymous album with local label Red House Records. Once I heard their gorgeous harmonies, and their deceptively simple yet surprisingly deep folk songs, I was hooked. They've been writing and performing together since they were teenagers, and the years of partnership are obvious in their camaraderie, ease, and trust with each other on stage. They sing primarily original songs, about love and life, relationships and choices, nature and spirituality, the very stuff of life. But the reason I (and so many others) keep coming back to their music is that I connect with it on a deeper level, like they're singing right to my soul. I've seen them in concert dozens of times over the years (including most recently at my new favorite outdoor venue Crooners), but they're truly in their element at Storyhill Fest. They're incredibly supportive of other artists, many of whose careers have blossomed since first appearing at the fest. Their discography, featuring hundreds of songs, is quite an accomplishment. They always sing the same old songs, with some new ones peppered in, but they're still so relevant and fresh, even 30 years later. But perhaps an even bigger accomplishment is bringing together this collection of artists and music enthusiasts for these beautiful festivals that are just total love-fests.

The nightly campfire after the scheduled mainstage performances is always my favorite part of this festival, which is difficult for a morning person. Really the only time I see midnight, the only time I'm willing to give up my precious sleep, is at Storyhill Fest (or perhaps a particularly exciting opening night post-show party). As I've mentioned many times on this blog, my favorite sound is the unamplified human voice, and when accompanied by a guitar, chirping crickets, the wind through the trees, the call of the loons, and the (imagined) crackling of a campfire, there's truly nothing more magical. The first night, with just a few dozen VIP attendees and a few artists, was a quiet night of trading songs in the dark. I lied down on a bench, staring at the stars, listening to these voices weave music, story, and magic. The second night was a much larger crowd, but just as things started to get going, we were chased away by rain (but not before Chris sang "some people run from an oncoming storm, I go in" and Johnny sang "it was a good rain, the kind that you wait for"). Finally, on the third night, there was a full campfire, with almost all of the artists there, and a gorgeous evening. I had to tear myself away at midnight, who knows how long it went on. The campfire sing is really a chance for the artists to hang out, sing what they want to sing, and be together, and we fans are just lucky enough to share in the magic.

I left Clearwater Forest Camp Sunday morning feeling sad that the weekend was over, but also totally satiated. These three days nourished my soul; the memories will help me get through what continues to be a difficult time in the performing arts and the world at large. I'll leave you with one of my new favorite songs of theirs, that I've never heard them sing live, but that they recorded for their album Where To Begin, released in 2019 for their 30th anniversary. The lyrics of "Campfire on the Taylor Fork" feel particularly relevant to this magical music festival, as well as to the difficult time we've been living in, and how we're going to get through it.

There is freedom in the song of this place
And everything works together
Creation and its grace
And the only thing higher than earth, wind, and fire
Is the song that sings us all together