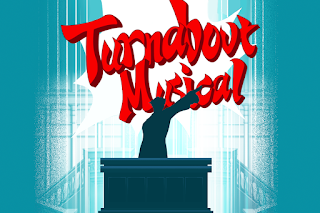 Summary: A "fan-written parody" musical based on the Ace Attorney video game series.

Highlights: I'm old and uncool, so I don't even know what a video game series is, much less where to find it or how to play (watch?) it. But it seems to have a built in fan base; the young women behind me were talking about the different characters, scenes, and songs as if they knew all about it. Even though that wasn't the case for me, I found it to be a fun and entertaining show. In a world where trials last at most three days and are decided by a judge because of an increase in crime (scary thought), underdog defense attorney Phoenix Wright (Christian LaBissoniere) works to free the innocent. The musical is a series of trials, each one lasting a few scenes/songs, often featuring defendants we met in an earlier episode. Since I did not see the runtime hidden on the "more information" tab on the show page and assumed it was 60-ish minutes like Fringe shows typically are, I had to leave halfway through the second act to get to my next scheduled show. But I got the gist of the accusation-trial-Phoenix wins formula. The huge and talented cast delightfully ham it up playing these broad crime characters, and do a good job with the score, singing unmiked to a recorded track. I would have preferred a trimmed down 60-minute version that adheres to the spirit of the Fringe Festival, but it's a great effort on a novel idea.