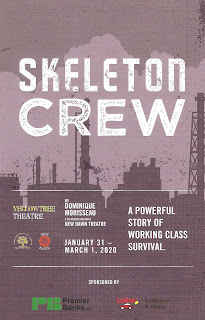 What better time than Black History Month for Yellow Tree Theatre to partner with New Dawn Theatre to present their first play (to my knowledge) with a black cast, director, and playwright? Looking around the suburban Osseo theater, I didn't see many people of color, but prolific and talented playwright Dominique Morisseau's Skeleton Crew, while being a specific story of the African American experience, is also a universal story of people struggling to survive and thrive in America. And if there's anything I've learned from Penumbra Theatre, it's that the African American experience is an important part of the American experience, and African American stories are stories that we all need to hear to better understand the world that we live in (see also Penumbra's The White Card). The fantastic four-person cast, along with the director and design team, beautifully bring this story to life.

Penumbra has produced several of Morisseau's work recently, including Detroit '67, which, along with Skeleton Crew, is part of  the cycle of plays she's written about her hometown called The Detroit Project (we just need someone to produce Paradise Blue to complete the trilogy). Detroit '67 explores the devastating riot of that year through music, while Skeleton Crew is a more modern story about the closing of auto plants in Detroit during the recent recession. The playbill has some interesting and relevant information about the Great Migration, in which millions of African Americans left the South for jobs in the North in the last century, specifically for jobs in Detroit's auto industry, meaning that the decline of those industries in this century hit the African American community in Detroit particularly hard. As director Austene Van puts it in a note in the playbill, this play "puts living, breathing flesh on the dry, bare bones of catastrophic statistics that reveal the devastating loss of employment and livelihood for far too many African Americans working in the auto industry."

The complex, real, and very human characters through which we experience this crisis are co-workers at an auto stamping plant that's in danger of closing. Faye is the veteran, approaching her 30th anniversary, having started at the plant when she was a young pregnant single mother. She acts as a mother hen to Shanita, also a young pregnant single mother, and the flirtatious and fun-loving Dez. Faye is also a sort of surrogate mother to supervisor Reggie, who lost his own mother, Faye's girlfriend. When Reggie learns of the plant closing, he isn't supposed to tell the workers but confides in Faye, and of course the others find out about it. The impending unemployment is a threat to everyone in the group: Reggie just bought a house for his family, Dez is working to save up enough money to open his own garage, Shanita is a talented worker who was looking forward to a long and successful career in the industry, and Faye is being forced into an early retirement she can't afford. There's nothing they can do to stop the plant closing, but they try to take care of themselves and each other in any way they can.

New Dawn's Artistic Director Austene Van directs her second play at Yellow Tree (after The Royale two years ago), leading a strong four-person cast composed of three familiar faces and one new. New Dawn company member Jamecia Bennett proves she's as powerhouse of an actor as she is a singer, with a gut-wrenching and raw performance as Faye. Nadége Matteis is making her #TCTheater debut as the sweet and strong Shanita. Mikell Sapp is charismatic as Dez, while also showing his darker side. Darius Dotch, who previously appeared in two of Morisseau's plays with Penumbra, brings out all of the tortured humanity of Reggie, torn between his responsibilities at the plant, a job he needs to take care of his family, and his friendship with his employees.

The entire play takes place in the factory break room, well represented by Nicole DelPizzo's scenic design of industrial gray, complete with lockers, a bulletin board littered with signs, and even a working coffee pot. Scene changes are made more interesting by the use of music and repeated sounds, and lighting effects which turn windows and doors into boxes in which we see the robotic dance-like movements on the line. Characters are dressed in traditional working clothes - jeans, t-shirts, sweatshirts, with supervisor Reggie sporting an array of ties and sweater vests. (Sound design by Jeff Bailey, lighting design by Courtney Schmitz, costume design by Samantha Fromm Haddow.)

Head on up to Osseo this Black History Month to see this compelling and common story of working class people living through changes in our economy that threaten their way of life.