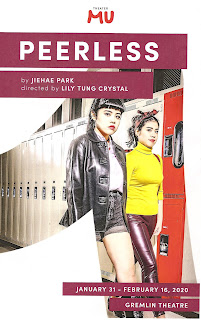 Peerless is a super dark comedy (sort of) about twin teenage girls who will stop at literally nothing to get into a prestigious college. For this regional premiere, Theater Mu has lured back to town a couple of alums, sisters Francesca and Isabella Dawis, to play the twins. Their independent and codependent performances anchor the strong cast that, along with clever design, brings out all of the dark corners of this sharply and smartly written play. The relatively short run continues Wednesday through Sunday for the next two weekends  at Gremlin Theatre in St. Paul, next door to Lake Monster Brewing which has daily food trucks, the perfect set up for dinner, drinks, and a show. (Click here for info and tickets.)

Twins M (Francesca) and L (Isabella) have had their lives planned out for years; they leave nothing to chance. The goal is to get into "The College;" the plan involves L being intentionally held back so that first M, then L can get the one affirmative action slot the school offers each year. When a fellow student, who finds out he's 1/16th Native American, gets the slot, the girls resort to drastic actions to make their dreams come true. Playwright Jiehae Park was inspired by Macbeth in writing this play, and you can definitely see it in the way that the two egg each other on. L seems like the more diabolical one, driving M to do things she doesn't want to, the Lady to Macbeth, if you will. The sisters are a united team until the story takes an even darker turn, and they decide that the only way to get what they want is every twin for herself.

The Dawis sisters grew up performing locally and now live together in NYC, but luckily for us they still come home to do a show every now and then. This is only their third time appearing in a show together, the first in over ten years*. The play is written such that the twins often finish each other's sentences, almost talking over each other with rapid fire dialogue. Francesca and Isabella pull it off flawlessly and almost seem like one person at times; it reminds me of the special quality of siblings singing harmony together. They also look so much alike when dressed identically and in similar hairstyles that it's hard to tell them apart at first, until the characters begin to differentiate themselves and we get to know them as individuals, and each actor fleshes out her character separate from her sister.

Meredith Casey plays a character known as "dirty girl," a fellow student who, like the witches in Macbeth, foretells the future in a cryptic way. She's as convincing as this misfit student as she is as the bouncy perky "preppy girl" in a later scene. Neal Beckman is so sweetly nerdy as the student who takes the slot, and is therefore the object of the sisters' evil plan, that you can't help but root for him. Rounding out the cast is Kenyai O'Neal as M's boyfriend, whom of course she was only dating as a part of the grand plan.

Mu's new Artistic Director Lily Tung Crystal makes her directing debut with the company and does a fine job navigating this tricky script, letting it be funny at times, darkly scary at others. Joe Stanley's versatile scenic design includes a rotating backdrop of high school lockers on one side and various locations on the other, and two long benches that also function as beds and a storage space for props. Scene transitions are accomplished efficiently with the help of a hidden door in the backdrop, and it feels thoughtful which of the actors move things around, staying in character. The twins are dressed in matching preppy school outfits (and super cute hello kitty pajamas); pay attention to each twin's signature pop of color  - red or yellow (costume design by Khamphian Vang).

Peerless takes an unflinching look at stereotypes and biases, how we used them to our advantage, how we undermine each other instead of being allies, how minority groups are forced to battle it out for the limited power available to them. And it's also a captivating dark comedy / psychological thriller with some shocking twists and turns.

*I learned a bit about the Dawis sisters from their appearance on an episode of the local theater podcast Thank You Places, hosted by #TCTheater artist Anna Hashizume.