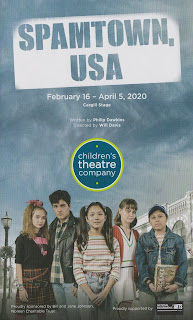 A character in the new play Spamtown, USA, premiering at Children's Theatre Company, says that writing a play about the mid-'80s Hormel strike in Austin MN is a horrible idea. He couldn't be more wrong. CTC has a way of speaking to children in an intelligent and engaging way, as does playwright Philip Dawkins (see also: The Sneetches). One of my favorite playwrights, Philip Dawkins never doesn't make me cry with his lovely and touching depiction of the full range of humanity, and this play is no exception. It's less about the intricate details of the strike, and more about how the people, in particular the children, of Austin were affected by it. In an endearing bit of fourth-wall breaking, the play admits that some of the facts and timelines are mixed up, but the emotions are true. At it's heart it's a story about how family, community, and friends survive a deep conflict that divides them in a way that seems irreparable. Sounds like a great idea for a play to me.

Spamtown, USA takes place from 1983 to 1986, on several typical days in a typical American town. We check in during spirit week at the local high school every year, marking the passage of time. The story centers on three Hormel families (inspired by real people in Austin interviewed by the creative team):

When the adults talk about the plant and union, the dialogue soon turns into something like "words, words, adult stuff, long words," similar to how the adults sound in Charlie Brown cartoons. Kids don't understand all the intricacies of labor unions (most adults don't either), so the words just wash over them; all they know is that their parents are angry or worried or happy. But there comes a point when they can no longer ignore the adult stuff, because the adult stuff begins to affect them. Amy and Travis are a bit like Romeo and Juliet, in love but with families on opposite sides of the conflict. When one brother decides to cross the picket line and go back to work, cousins can no longer play happily together like they used to. The strike rips apart families, neighborhoods, friends, the entire community. It eventually ends, as everything does, and our families are left to pick up the pieces and go on with their lives. A coda at the end tells us briefly how they did that, but Austin in 1986 is never far from their minds.

Under director Will Davis, the play flows smoothly from scene to scene, location to location, family to family, with a nice momentum, but not rushed so that the varied and complicated emotions can play out. Each of the five child actors in this cast are so present, natural, and engaging; it's really easy to emotionally connect with their varied traumas. The kids are the focus of this story and they carry it well, with nice support from the adults.

While the kids in the audience (the show is recommended for 9 and up) might not get all of the '80s references, their parents will likely be delighted with them and the '80s music playing pre-show, as I was. Marty McFly, garbage pail kids, moon boots, and lots of fun '80s slang (watch this adorable video of the Gen Z-ers trying to figure out the Gen X slang). On a less fun '80s note, those of us who were students in January 1986 know exactly where the aspiring astronaut story is heading; the scene of Scott watching it play out brought me right back to that awful day.

Spamtown is presented on the Cargill Stage on the ground floor of CTC (the charming Bob Marley musical Three Little Birds is still playing upstairs through March 1). The set has a cold bright industrial feel, appropriate for the meat-packing plant that is the backdrop of this story. A curtain of clear plastic strips hangs at the back of the stage, and the three family homes are represented by white opaque vaguely house-shaped walls that move and spin. The only other set pieces are boxes with the Hormel logo on them that serve as chairs, tables, cars, and more. There are some cool effects created with light, shadow, and sound, especially against the curtain. Lastly, I only wish Trevor Bowen were designing my clothes in the '80s so I could have looked as cool as these kids. (Scenic design by Christopher Heilman, lighting design by Karin Olson, sound design and composition by Victor Zupanc.)

Spamtown, USA takes a complicated issue that was a historic event in Minnesota (the governor called in the National Guard at one point) and distills it down to an engaging and personal story that kids (and adults) can understand and connect to.