The Ruth Easton New Play Series at the Playwrights' Center 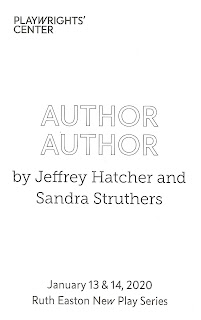 Have you been to The Playwrights' Center lately? Their Ruth Easton New Play Series is in full swing, in which they present two readings of a new work of theater the first (or second) week of the month, December through April. Unfortunately I missed December, but I'm so grateful I was able to make it this month because this Jeffrey Hatcher/Sandra Struthers creation is sheer delight, and also unlike anything I've ever seen before. You never know what you're going to get at PWC, so why not take a chance and be part of the new play development process? Read on for more details on this and other readings in the series, then head out to the Playwrights' Center tonight to catch the second reading of AUTHOR AUTHOR! Did I mention it's FREE?!

AUTHOR AUTHOR
Monday, January 13, 2020 - 7:00pm
Tuesday, January 14, 2020 - 7:00pm
Written and performed by: Jeffrey Hatcher & Sandra Struthers
Stage directions read by: Jennifer Blagen
Director: Larissa Kokernot
Dramaturg: Jeremy B. Cohen
Design consultant: Joel Sass
Lighting design: snem DeSellier
Apprentice stage manager: Sunny Thao
Description: When playwright Jeffrey Hatcher and actress Sandra Struthers co-write a show about novelist Henry James and actress/suffragette Elizabeth Robins, sparks fly and tempers flare. Dancing between Victorian England and the present, AUTHOR AUTHOR explores questions of friendship and power in male-female relationships with wit, heartbreak, and a dash of mystery. Tracking gender dynamics across history, AUTHOR AUTHOR is a #MeToo play that‘s less interested in pointing fingers than finding connection.
My thoughts: This play about a playwright and an actor writing a play about a playwright and an actor writing a play is clever, witty, moving, personal, historical, and very meta. "Playwright who occasionally acts" Jeff and "actor who occasionally writes" Sandra portray three sets of characters/times/realities that all speak to each other, and to today. They're themselves, they're Henry and Elizabeth, they're the characters in Henry's book The Americans that he's adapting into a play, with Elizabeth's help. Elizabeth helps Henry flesh out the female character in his play, and Sandra helps Jeffrey do the same; women want to be more than just a man's muse. But it's more complicated than that, as the present and past writers bring themselves and their histories into the work that they're doing, and the timelines begin to overlap. It's truly a fantastic and unique play about art, gender politics, relationships, and partnership.

Malvolio by Betty Shamieh
Monday, February 3 & Tuesday, February 4 at 7 p.m.
In this sequel to Twelfth Night, Malvolio is a famed general fighting in an endless war against a “Barbarian” nation. He encounters Volina, the serious-minded daughter of Viola and Orsino, who disguises herself as a male to enlist in his army. Volina tries to teach Malvolio that unbelievably good fortune—and a young lover—is always the best revenge.

#ROYCE by Darren Canady
Monday, March 2 & Tuesday, March 3 at 7 p.m.
Darnell, Cam, and Bruce are three queer black men with a deep friendship that goes back years and has sustained them over time, distance, and the instability of life’s vicissitudes. But when Bruce’s lover is killed in a murky encounter with police, the fallout tests the trio’s bond, forcing each man to confront the colliding complexities of race, sexuality, geography, violence, and male intimacy.

Tha Chink-Mart by Ray Yamanouchi
Monday, April 6 & Tuesday, April 7 at 7 p.m.
In a small, suburban town in Long Island, New York, five Asian American teenage friends struggle to survive high school. The majority of the student body views them as "Asian“ and their families consider them too "American.“ Finding solace only amongst each other, they attempt to define for themselves and embrace what it means to be an Asian in America.

Monday, December 9 & Tuesday, December 10 at 7 p.m.
When college poetry instructor Carolina and her student Benjamin first meet, an attraction blossoms, but the possibility of romance is halted by Carolina, who cannot overlook the age difference in good conscience. Spanning twenty years, this May-December romance follows Carolina and Benjamin as they meet at three different moments in their lives. December is a meditation on love, poetry, and timing.