"The Convert" by Frank Theatre at Gremlin Theatre 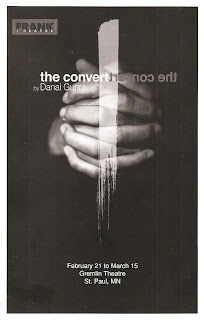 Two years ago, the Guthrie premiered a new play Familiar by Danai Gurira. You may know her from a little movie called Black Panther or the obscure TV show The Walking Dead, but before her success on the big and small screen she started her career in theater, including at St. Paul's Macalester College. Now Frank Theatre is bringing us the regional premiere of her 2012 play The Convert, having previously produced Eclipsed in 2010 (which went on to become Danai's first show on Broadway). While Familiar is a dramedy about a Zimbabwean-Minnesotan family (based on her own), The Convert is a much more serious look at the history of Zimbabwe, in particular the colonialism and missionary work in which the English tried to subdue, subjugate, and convert the native Shona people. In particular it tells the story of one young woman who seems to happily convert to Roman Catholicism, but feels conflict at leaving the ways of her people behind. It's an intense play that humanizes the people on all sides of this conflict, as always thoroughly and thoughtfully realized by director Wendy Knox, the strong seven-person cast, and the creative team.

The entire play takes place in the late 19th Century home of Chilford (Yinka Ayinde), an African who has been living and studying with the white missionaries since he was a boy. He has completely renounced the beliefs and customs of the Shona, and aspires to be a priest. His housekeeper Mai Tamba (Ivory Doublette) prays to the Virgin Mary when directed, but still believes in and performs the traditions she was brought up with, including something with bones, and tucking a (dead?) snake into the couch. To prevent her niece Jekesai (Ashe Jaafaru) from being forcefully married to an old man who already has many wives, she asks Chilford to take her in. He agrees, names her Ester, and insists that she study with him. She proves to be an intelligent and quick-learning student, and soon appears to be completely converted to the ways of the church. This concerns her cousin Tamba (Maje Adams) and uncle (Warren C. Bowles), who see this as a betrayal and know that there is trouble brewing between the settlers and the natives. Also caught in the conflict are Chilford's friend Chancellor (AJ Friday) and his fiance Prudence (Hope Cervantes), who attempt to walk the fine line of living as the whites but still being connected to their people. Eventually Jekesai/Ester is forced to choose a side, with tragic results.

The missionary home is well represented on stage with simple but elegant period furniture, and not one but two crucifixes. The costume design ranges from the traditional garb of the Shona to the formal Victorian attire of "the converts." The cast very convincingly speaks Shona (with no translations but plenty of gestures and expressions that convey the gist of the conversation) and the specifically accented English of this time and region. (Scenic design by Joe Stanley, costume design by Kathy Kohl.)

The talented cast bring depth and humanity to all of these characters, even when you question their choices. Denying people the right to connect with their families through ancient traditions passed down through generations, and forcing them to believe in a story that has no connection to them, seems inherently wrong. But yet, saving a young woman from the fate of being the tenth wife of a much older man, and giving her an education, seems like a good thing. The history of colonialism in Africa and the enforced religious conversion by missionaries has left lasting and complicated scars, which this play illustrates with an engaging human story.

The Convert continues through March 15 at Gremlin Theatre.