"The World Over" at Open Window Theatre 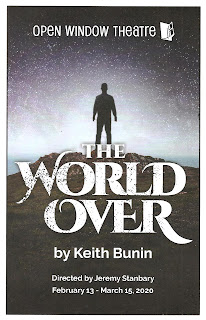 It's been almost four years since Open Window Theatre lost their space in Minneapolis due to a conflict with the landlord that resulted in a multi-year lawsuit, which they eventually won. Now they're back in a brand new space in Inver Grove Heights (about ten miles south of St. Paul). They're presenting two shows this spring in what looks like a strip mall in the suburbs, in which they've created a nice space with an intimate theater. The World Over, which opened this weekend and runs through March 15, is a fitting story of overcoming obstacles in pursuit of a singular goal.

This is a classic hero story, and our hero is named Adam. The fantastical story is framed by a historian (charmingly portrayed by Grant Hooyer, among other memorable characters) showing us maps and talking about a country called Adamus that existed for only one day. We then follow Adam's (a winning Andrew Hey) journey through many trials. When he's discovered living alone on an island by a ship that's out to capture lands for their king and subdue the natives (an unfortunate narrative even in a fantasy), he willingly gives himself up. A crew member tells him a children's story about a lost prince of a land called Gildoray because he wears a similar ring as the prince in the story, and he becomes convinced that he is that prince, despite the fact that no one knows if Gildoray even exits. He then sets out on a mission to find his lost country and rescue his people, a mission that continues through pirates, wars, rescuing and marrying a princess, hurricanes, and being locked in a cave. Phew, that's a lot for one person to go through, but he never loses faith that he will accomplish his goal, despite what it costs him.

The plot is a mix of Man of La Mancha (Adam believes in an impossible dream no one else can see), The Princess Bride (the comic-fantasy tone and similar sounding land to Guilder), Game of Thrones (power-hungry rulers, exposition in a brothel, and too many people being killed onstage to count), and any number of Shakespeare plays (people being lost at sea and then coincidentally turning up in just the right place decades later). Unfortunately the female characters are mostly one-dimensional and stereotypical, being defined by the men in their lives - wife, daughter, prostitute, mother. The worst is when a young price meets a young woman and they have a pleasant exchange, after which he declares "this is the girl I will marry," and she doesn't even get to answer, she just runs away with him giggling. The exception is one strong warrior queen who wages war against her son. Director Jeremy Stanbary has made up for this imbalance a bit by gender-blind casting in the roles of pirates, soldiers, etc. And the talented cast (although sadly lacking in diversity) is so good at playing multiple distinct roles in this epic story that I was surprised when only eight actors came out for the curtain call; it feels like a much larger ensemble (also including Abby Day, Dawson D. Ehlke, Elizabeth Efteland, Erika Kuhn, Randy Schmeling, and Tucker Brewster Schuster).

The bright, clean, open new theater space is mostly in a proscenium setup, with a few rows on either side of the performance space that make it almost a thrust. It looks versatile enough to be changed up for different shows. A series of wooden platforms are used in multiple ways, with a ship's mast on either end that brings the action out into the audience. There's some clever use of scarves and nets to simulate water and motion, and the costumes are charming and versatile Renaissance Fair garb. (Set deisgn by Sarah D. Pierucki, costume design by Nate Farley).

Congratulations to Open Window Theatre to making it through the last few challenging years and finally arriving at their own Gildoray in Inver Grove Heights. Even thought it's a bit of a drive for me, it is great to see #TCTheater expanding out into the suburbs. Check out The World Over now, and watch for their next show, the US premiere of Tolkien, coming in April.