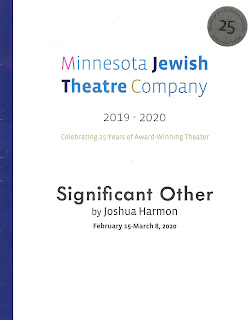 Minnesota Jewish Theatre Company is continuing their 25th anniversary season with the regional premiere of the 2017 Broadway play Significant Other. They last produced the work of NYC-based playwright Joshua Harmon several years ago with Bad Jews. Both plays are smart and sharp modern comedies with depth, but while Bad Jews was about cultural identity and family, Significant Other is about, well, finding a significant other. Society put so much pressure on us to be coupled, a pressure that our protagonist Jordan feels increasingly strongly as he watches his friends get married. MJTC's production is top notch and features a fantastic cast and elegant deceptively simple design. If you've not been to MJTC lately, this is a great time to check them out.

It's a few years past college, and Jordan is still close with his best girlfriends Laura, Vanessa, and Kiki. The play begins with Kiki's bachelorette party, followed closely by her wedding. One by one, all of his friends find a man and get married, while Jordan is still looking for Mr. Right. Jordan's other best friend is his grandma, whom he tells about each successive wedding. Grandma then asks about his social life, and assures him that he will be the next to find someone special. But he's beginning to doubt that, when his crushes on work colleagues and old friends amount to nothing. His existential crisis culminates when BFF Laura, with whom he talked about starting a family, gets married, which he views almost as a betrayal or break up. But some wise advice from a grandma, and continued support from his friends, although in a different way, just might get him through.

Hayley Finn Directs this fantastic cast, with scenes that flow smoothly from one to the next, and brings out all of the wit and emotion in the script (#bringtissues). This play doesn't work without a good Jordan, and they found one here in Bradley Hildebrandt. I believe this is the first time I've seen him on stage, and he's great in this role, likable and sympathetic, and believable in all of the emotions Jordan goes through. His girlfriends are well-cast too - Olivia Wilusz is a delight as party girl Kiki, Audrey Park is the cool and sarcastic Vanessa, and Chloe Armao is wonderfully warm as the "school marm" of the group Laura. Both Paul LaNave and Tony Larkin pull triple duty, creating three distinct characters as various boyfriends, husbands, and dates of the four friends. Rounding out the cast is Nancy Marvy, everything you could want in a grandma.

Walking into MJTC's small auditorium theater, I was intrigued by the set. It almost looks unfinished, just three flat gray walls with multiple squares of various sizes outlined in lighter gray. But since this is Michael Hoover, I knew there was more to it, which is revealed as the play goes on. Each of those little boxes opens up to display a bookshelf, a closet, a bar, a coffee pot, and any number of props. It's a very clever and efficient way to represent all of the locations of the play, from office to bedroom to bar to wedding venue. Our four friends, and their guys, are very chic and modern in their dress, each with a specific style that makes them feel like real people (costume design by Rubble&Ash).

This is a smart, funny, relatable, and poignant play by a talented young Jewish playwright, a perfect fit for Minnesota Jewish Theatre Company. And they have definitely risen to the occasion and brought us a fantastic production of it (continuing through March 8).