"Ada and the Engine" at DalekoArts 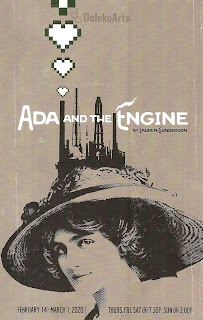 Lauren Gunderson currently holds the title of the most produced playwright in America (see: her Pride and Prejudice fan fiction produced annually at the Jungle). Her plays often center on female heroes, fictional or historical. It's no wonder her plays are frequently produced; this is exactly the kind of play we're hungry for right now. DalekoArts is producing the regional premiere of Ada and the Engine, a play about 19th century mathematician and arguably the world's first computer programmer Ada Lovelace. This smart, funny, poignant (spoiler alert: Ada died young), insightful play is beautifully realized by DalekoArts and 100% worth the drive to charming New Prague.

Many of Lauren Gunderson's plays are about science, which really appeals to me, as someone with a BA in math, MS in statistics, and day job as a statistical programmer. But you don't have to be a science nerd to appreciate Ada's story; she's extremely relatable to anyone with a passion for any subject, a hunger for knowledge, a desire to know how things work and how to make the world better. The play takes us through Ada's life from the age of 18 to her death at age 36. In less than two hours, the years fly by in a flurry of letters. The play focuses on Ada's friendship with Charles Babbage and her work with him on his groundbreaking invention, the Analytical Engine, which was never actually built but paved the way for the modern computer. Ada wrote a paper for publication describing the engine, which brought the two closer and also created tension in their relationship. The play imagines that their relationship was something more than friendship, something more intimate, despite the 25-year age difference and Ada's marriage to the Earl of Lovelace, shown here as more of a marriage of mutual benefit than a love match. But the true love story is that of Ada and her love for math, music, poetry, programming, all of which come together in a beautiful imagining after her death, when she finally sees the future. A future we're living in now.

Director Amanda White leads us through this story gracefully, scenes flowing smoothly from one into the next, the wordy science bits balanced nicely with the emotions of the story. Eva Gemlo is radiant as Ada, all open raw emotion as she fully inhabits this smart, spirited, and charmingly awkward woman navigating her life and work. Michael Lee is also wonderful as Charles, both the scientist and the man, and the two actors share an easy chemistry. The strong cast (all speaking in charming British accents with help from dialect coach Keely Wolter) also includes Kirby Bennett as Ada's mother, with whom she had a difficult relationship; Dillon Baxendell as humorless Ada's husband; Shanan Custer as Ada's friend and mentor Mary Somerville, whom I wish we saw more of; and Jonathan Feld, making a lovely and surprising appearance as Ada's famous father, the poet Lord Byron.

Daleko's tiny and intimate stage has been transformed into a 19th century drawing room, dominated by a chaise lounge on one side and desks littered with paper, drawings, and gears on the other. The women swish around onstage in impossibly full skirts, with the men in formal attire. Lighting and sound help us through transitions between scenes, locations, and worlds, culminating in that gorgeous ending I referred to earlier. Who knew that computers could make me cry tears other than those of frustration? (Scenic design by Robin McIntyre, costume design by Cindy Forsgren, lighting design by Courtney Schmitz, sound design by Glenn Guiliano.)

I've only seen a few of Lauren Gunderson's plays, but based on this and previous eperiences with her work I want to see them all (note to #TCTheater: top of my list is Emilie about 18th physicist Emilie du Chatelet; fun fact - I was almost a math/physics double major). How can I not love a playwright about whom the New Yorker wrote "her plays are less likely to end in a kiss than a beautiful explosion of computer data." Be still my math/stats/programmer heart! This beautiful ending, and Ada's work, remind me of a quote on a t-shirt I saw once: "mathematics is music for the mind, music is mathematics for the soul."

The smart, funny, feminist, historical, scientific, lyrical, and absolutely lovely play Ada and the Engine can only be seen at Daleko Arts, for only two more weekends (through March 1). It pairs nicely with Gunderson's Silent Sky about astronomer Henrietta Leavitt, produced at the Bell Museum by Theatre Pro Rata and opening this weekend. Hooray for modern and engaging plays about historical women in science!