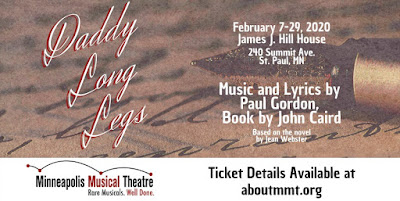 The first act of Minneapolis Musical Theatre's Daddy Long Legs, playing at the historic James J. Hill House, is perfectly lovely. I assume the second act is too; I didn't get to see it because I had to move my car due to a snow emergency and there was nowhere else to park. I had no other choice but to go home, which breaks my heart because never in my life have I left a show at intermission and I never voluntarily would, I think it's disrespectful. But despite the unfortunate early end to the show, I still enjoyed the experience. This regional premiere of the 2015 Off-Broadway musical, based on the 1912 novel of the same name, is well worth seeing; it's a charming story with a beautiful score, and this is a lovely and intimate production by MMT.

Daddy Long Legs is not about spiders, or a father-daughter relationship, as the title might suggest. It's about a young woman, an orphan, who is sponsored in her education by a wealthy man who keeps his identity hidden from her. She is to write him letters regularly, but he will never answer back. If this sounds like a power imbalance in a relationship, well it is. But the benefactor begins to care for the young woman, and decides to meet her in person, not telling her that he's her benefactor. It's a bit of a You've Got Mail situation, except one person knows who the letters are coming from, and the other doesn't. Wikipedia tells me that in Act Two the truth is revealed, eventually leading to a sweet and happy ending, but it's the getting there - the aching, the longing, the confusion - that's the fun of it.

The musical is performed in the foyer in front of the grand staircase at the James J. Hill House. The intimate space allows for seating of about 30 to 40 audience members, so this is about as close as you can get to a musical. I'm not sure why the singers are miked in such a small space when they're literally standing three feet in front of the audience, but it's not obtrusive. The three-piece band, led by Jean Orbison Van Heel on keyboard, is seated on the stairway landing, and the sound is quite lovely in this mostly sung-through musical. Most of the scenes involve one of the characters writing to the other, or thinking about the other, or talking to themselves about the other, but that doesn't prevent some lovely harmonies from happening.

Director Amanda Weis makes great use of the space and leads this talented two-person cast through the sincere emotions of the piece. Maddie Olsem and Chris Paulson are both relative newcomers to the #TCTheater scene and are well cast here. They both sing beautifully, and also convey the emotions of the characters and situations, not afraid to look the audience in the eye. They're dressed in charming period costumes, with just a few pieces of furniture that look like they belong in the Hill House. (Costume design by A. Emily Heaney, prop design by Sara Kessler.)

Daddy Long Legs is another example of Minneapolis Musical Theatre fulfilling their tagline "rare musicals, well done." Often their shows are big or comic or scary or campy, so it's nice to see that they can do a sweet, small, intimate show like this just as well. The show runs weekend evenings through the end of the month, and is a rare opportunity to see a new musical in this sort of site-specific and almost immersive setting. I might have just talked myself into going back to see the second act, assuming it doesn't snow (seriously though the street parking is usually easy around the Hill House, unless there's a snow emergency, so watch MMT's Facebook page and arrive a bit early just in case).