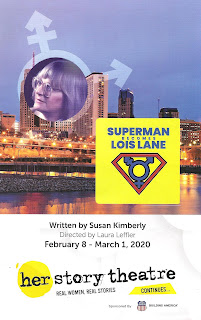 A year after it began, HERstory continues at St. Paul's History Theatre. But this HER had to work a little harder to claim that correct pronoun that many of us take for granted. Superman Becomes Lois Lane is the true story of the playwright Susan Kimberly, who transitioned to her correct gender as a bit of a public figure in St. Paul in the 1980s, and went on to become the first transgender woman to serves as deputy mayor of a major American city. It's an engaging and inspirational story, told in a fantastical yet grounded way, that provides insight into one person's journey to their truest self.

The journey from Bob to Susan is told in a non-linear way, beginning with a near-death scare that finally convinced Bob to transition into Susan full time. Both Bob and Susan are present for much of the play, portrayed by two different actors, but with a connection between them and a similarity of physicality that makes it easy to see them as one person. They converse with each other as they navigate their life, from Bob as a young child telling his mother he's a little girl not a little boy; through Bob's marriage to Mae, with whom he was honest about his true self from the very beginning; to Susan's emergence; to her swearing in as St. Paul's deputy mayor. Along the way she faced many challenges, as well as support, sometimes from unexpected places. She also discovered a past life, which feels a little like an unnecessary digression, but is part of her truth. For a first time playwright, the story is remarkably well told, with humor, humanity, and honesty.

Transgender actor (a must for this role) Freya Richman portrays Susan in such a natural, charming, and disarming way that you can't help but root for her, as she brings out all of the varied emotions in Susan's journey. Sean Michael Dooley is equally convincing as Bob, and the two have obviously worked together on their performances (with director Laura Leffler) so that they do feel like two facets of one person. Jamie White Jachimiec is strong and sympathetic as Mae, the third person in what is sort of a relationship triangle. Hard-working ensemble members Sam Landman, Casey E. Lewis, and Melanie Wehrmacher play multiple memorable supporting characters in various outfits and hairstyles (but surprisingly no wigs!).

The story plays out on a super cool multi-level set with steps going in all directions, and cube furniture that looks like part of the geometric pattern, all in '80s colors of bright pink, purple, and blue. Projections onto two large screens continue the cube theme, mixed with vintage scenes of the Twin Cities and NYC. The frequent time jumps are made easier to follow with projections of time and place. Costumes are of the delightfully dated and awkward '80s variety. (Scenic design by Michael Hoover, video design by Kathy Maxwell, costume design by Rubble&Ash.)

I applaud History Theatre for telling this story at this time, but I'm not surprised; their work continually fosters and supports unheard voices in local history. The playbill contains some great information and a glossary around transgender issues (compiled by dramaturg Catherine Charles Hammond), terms that can be confusing for those unfamiliar. This is an inspiring human story that can't help but create empathy in the audience for our transgender fellow citizens.