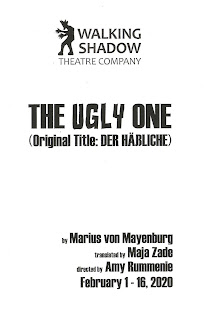 The Ugly One (aka Der Häßliche auf Deutsch) is a funny and absurd little play that skewers our obsession with looks, in particular the concepts of "beautiful" and "ugly." Unfortunately the protagonist is an able bodied white male of average height and weight, which is the least likely person to be discriminated against because of looks. In the workplace, women are expected to wear make-up, people of color sometimes can't have natural hairstyles, older people are expected to color their hair to look younger, and people with different body shapes, sizes, or abilities face looks-based discrimination most often. Which makes the story of a man who's so ugly he's overlooked at work seem a little unlikely, but maybe that's the point. Maybe he represents how silly and unfair all looks-based discrimination is. Regardless, Walking Shadow Theatre Company's 70-minute production is well done - delightfully odd, funny, and does make one think about all of the above issues.

The story begins when Lette's boss tells him he can't make a big presentation at a conference about the thing he invented; he's shocked to learn that it's because he's unspeakably ugly, something he never realized before (again, evidence of his whiteness and maleness that he was even able to get this far looking so ugly). His wife confirms it, but assures him that she loves him anyway, even though she avoids looking him in the face. Lette decides to get a full facial reconstruction, which is so successful that no one recognizes him and everyone thinks he's beautiful. At first life is wonderful, he now has all the privileges that the pretty people enjoy. But soon the doctor who performed the reconstruction starts giving his face to other people, and he's no longer special. When everyone looks the same, what is beauty? What do we use then to make us special?

Director Amy Rummenie directs a lovely four-person cast. Sean Dillon is an affable everyman as Lette, and then makes a believable transformation to the cocky entitled beautiful person. Corey DiNardo, Edwin Strout, and Julie Ann Nevill all play multiple characters without the aid of wardrobe or even a name change. At first I wished they'd have some small clothing change to signify the different characters, but soon it became apparent which character they were playing just by their voice and physicality, each of the actors creating distinct and clear characterizations.

The play is written with one scene often morphing into the next, sometimes mid-sentence, and it's accomplished seamlessly thanks to the direction and acting, as well the lighting that signifies a scene and/or location shift. The modern block set very neatly and efficiently transforms Open Eye's tiny stage from one location to another, as blocks are turned or opened. Finally, the costume color scheme is a cool and pleasing black/gray/white with touches of red. One thing that's definitely not ugly about this show is the design. (Lighting design by Tony Stoeri, scenic design by Sarah Brandner, costume design by Kathy Kohl.)

The Ugly One continues at Open Eye Figure Theatre through February 16.