"Twelfth Night" at the Guthrie Theater 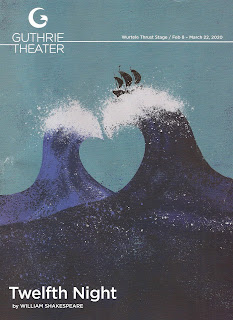 For their annual Shakespeare production, the Guthrie is bringing us a truly delightful, innovative, and playful rendition of the comedy Twelfth Night. And in a surprising and wonderful choice, the cast is 100% local. I'm someone who often calculates that percentage at the Guthrie, and while I appreciate the chance to see national talent on the local stage, I'm also the biggest fan of our #TCTheater community, so I always want that percentage to be higher. It's wonderful to see that rich, deep, broad, diverse, incredibly talented community 100% represented on stage in this production. The show is as Shakespeare's comedies are meant to be - fun, playful, accessible, almost interactive, heartfelt, and hilarious.


If you, like me, have a tendency to get all your Shakespearean romantic comedies confused, here's a brief reminder. Twelfth Night is the one with the shipwrecked male and female twins who are separated, each thinking the other is drowned. Viola decides to disguise herself as a man, as one does in such situations, calling herself Cesario and going into service for the Duke Orsino. On his behalf she woos the mourning Olivia, who wants nothing to do with the Duke but falls for young Cesario, who in turn is in love with the Duke. Viola's twin Sebastian shows up later causing much amusing Shakespearean confusion. Meanwhile, Olivia's handmaid Maria, her kinsman Sir Toby the buffoon, and his equally ridiculous friend Sir Andrew play a cruel trick on another member of her household, Malvolio, using his love for Olivia to humiliate him. It's all tied together with music, "the food of love," and in the end everyone lives happily ever after as true identities are revealed.*

Here are a few highlights of this production.

This fun and playful and 100% locally cast Twelfth Night continues on the Guthrie thrust stage through March 22.


*Plot summary adapted from what I wrote about Theater Mu's production a few years ago.