"The White Card" at Penumbra Theatre 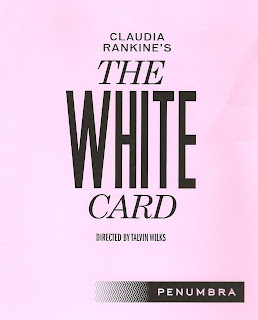 "Perhaps this play might seem an odd choice, with such a [mostly white] cast, during Black History Month. But for me it is exactly the point. Rather than spend the month extolling the accomplishments of African Americans, it seems critical at this juncture of American history that we instead task white people with the fight against rising racism and bigotry in this country. That fight must be waged in living rooms and dining rooms as well as the Senate and the streets. That fight begins with critical self-examination." So notes Penumbra Theatre Artistic Director Sarah Bellamy in a note in the program for The White Card, which does exactly as she describes. The difficult conversations that arise when a black artist has dinner with white patrons of black art, who think that they're helping the cause of racial equality and justice but don't fully comprehend the problems or their place in them, are exactly the kinds of difficult conversations we need to be having right now. This is a play that white people need to see to gain some perspective and further that process of critical self-examination. It's very smartly and succinctly written, and sharply brought to life by the team at Penumbra.

Claudia Rankine is perhaps better known as a poet; her book of poetry Citizen: An American Lyric was adapted into a stage play, which I called "powerful, disturbing, and transfixing" when I saw Frank Theatre's production a few years ago. Like that work, her play The White Card takes a searing look at American society and the racism imbedded in its very structure (as one of the characters says, "we were all raised wrong"). But while Citizen is a series of lyrical vignettes, The White Card tells a clear and linear story about a group of people who meet at a dinner party and change the course of each others lives as they're forced to rethink everything they thought they knew.

Charlotte (Lynnette R. Freeman) is a black artist who's work mostly consists of staged photographs of violence against African Americans; her latest project is to stage the crime scene of the Charleston church massacre. Charles (Bill McCallum) and Virginia (Michelle O'Neill) are a wealthy white couple who collect black art, specifically pieces that depict racial violence. Seems like a perfect match, right? But when they get together, along with Charles and Virginia's activist son Alex (Jay Owen Eisenberg) and art dealer/intermediary Eric (John Catron), things get very real, very fast. Charles believes that with his art collection and charity work he's helping to bring awareness to racial inequality and injustice, Alex takes to the streets in protest with groups like BLM and SURJ, Virginia wonders "can't we all just get along" (cringe), and Eric just wants to sell some art. Charlotte points out the hypocrisy that Charles' company builds prisons, in which people of color are disproportionately incarcerated, and that much of his art depicts black death. In turn, Charlotte begins to question if her work is removing the humanity of her deceased subjects. The dinner party collapses under the weight of these heavy topics, until Charlotte and Charles meet again a year later to debrief.

Zora Neal Hurston wrote "I feel most colored when I am thrown against a sharp white background." The play explores that idea, and the design of the set takes it literally. White walls and floor extend beyond the stage into the audience, making us feel uncomfortably close to the action. All of the furniture in the modern home is white, and the family is dressed in chic neutrals that look expensive, in contrast to Charlotte's colorful print dress (which also looks expensive, but more artsy). The art collection (including a print of this Zora Neal Hurston quote) is projected onto white squares around the space, which change to highlight different facets of the story. (Scenic design by Chelsea M. Warren, costume design Mathew LeFebvre, projections design by Kathy Maxwell.)

Talvin Wilks directs this fantastic cast, with a few moments of humor and many moments of discomfort, which is a good thing for an audience to experience. In less than 90 minutes the playwright, director, and cast really get to the crux of the matter without blaming anyone, just shedding light on our unconscious biases. This play asks the difficult questions, without answering them. How do white people become true allies in the fight for racial equality and justice, without playing the "white savior?" How do we acknowledge the privilege that comes with whiteness and the ways we benefit from the racist foundation of our country while trying to dismantle it? How can we work together to bring about a more just world? I don't have the answers, but plays like this give me hope that one day we'll find them.

The regional premiere of The White Card continues at Penumbra Theatre in St. Paul through March 1.