"After the Fires" by Transatlantic Love Affair at Illusion Theater 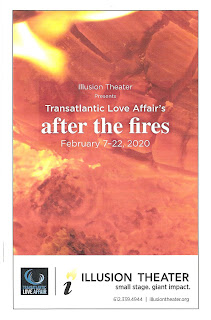 Transatlantic Love Affair is a unique #TCTheater company. Unique in their process (ensemble created work rather than a set script, although other companies in town do that too), unique in their execution (they create the entire world of the play with their bodies and voices only, without the use of sets or props), and unique in the feeling evoked by their work (indescribable). They often reintrepret fairy tales or classic stories that we all know, but sometimes create new fairy tales as well. Their latest work After the Fires, playing at Illusion Theater through February 22, is an example of the latter. It's an original story that feels like an old story, a story of courage, adventure, nature, and community.

The story takes place in a desolated land "after the fires." A sickness is plaguing the community, there is no water except what they can get from a well, and the mythical healers have left them. They have rituals around their every day lives, from the wells, to the pots that hold the water, to the funeral services. Director Isabel Nelson noted in a post-show discussion that they were interested in the classic hero cycle, but less interested in it being a solitary hero. So they settled on a pair of heroes - friends Robin and Wren (everyone is named after the birds that have left, so they know what shape their spirit will take when the die). Apprentices to the keeper of the clay and well (respectively), the pair is sent on a quest to find the healers in a place known as "the green." What they find there and who the healers are is surprising and beautiful. As is often the case in hero stories, they accomplish their goal and bring life back to the community, but not without cost.

The six-person ensemble is comprised of company members Allison Witham (Robin) and Derek Lee Miller along with TLA newcomers Boo Segersin, Domino D'Lorion, Gracie Anderson, and Vinecia Coleman (Wren), dressed in matching simple neutral-colored loose-fitting pants and shirts. Together, they help the audience imagine the world of the story. Aiding in this process of collective imagination is the soundscape created by Emily Dantuma on the cello, with various looping affects (at some point the sound became so organic to the story that I forgot she was even there), beautiful and sometimes dissonant vocal music and chants (composed by Walken Schweigert), and lighting effects that take us through various locations and times of day (designed by Barry Browning).

It really is difficult to describe what they do to someone who's never seen TLA before, other than to say the ensemble creates everything in the story - they mime actions with invisible props so well you can almost see them, and create an almost visible landscape. That isn't to say that everything is conveyed perfectly; I did not see the sand dunes at all until it was pointed out to me after the show, and what were supposed to be fireflies I thought were birds. But Robin climbing to the top of a tall tree to look out over the forest was as clear as if in a movie. But that's OK, everyone sees something different, that's the beauty of art in general, and this type of art in particular. It's up to us to fill in the blanks within the gorgeous lines the ensemble paints.

Head to Illusion Theater, on the 8th floor of the Cowles Center on Hennepin Avenue in downtown Minneapolis (tip: park at the library for just $5 evenings and weekends) between now and February 22 to see After the Fires, another uniquely lovely creation by Transatlantic Love Affair.