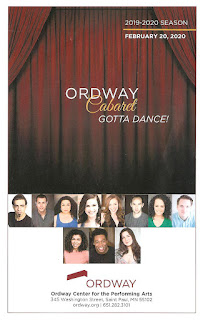 The Ordway began their second year of the "Ordway Cabaret" series with "Gotta Dance!" This fantastic series of one-night only cabaret shows not only features our amazing local music-theater community, but also allows the performers to tell their own story about what musicals have meant to them in their life. We all are drawn to the theater for different reasons at different times in our lives, whether as performers or audience, and it's wonderful to connect with the artists in this way. Dancing has always been a part of the series, with some choreographed or semi-choreographed numbers. But in this installment, dance takes center stage - literally! It really reminded me of a #TCTheater version of A Chorus Line, but more casual and intimate and true. Read on to find out what you missed, then stay tuned for details about the next installment!

The cabaret featured eight dancers who also sang a little (C Ryan Shipley, Chelsea Rose, Gabrielle Dominique, Jaclyn Juola, Joey Miller, Reese Britts, Renee Guittar, and Rush Benson), backed by three vocalists who also danced a little (Brianna Graham, John Jamison, and Suzie Juul). Accompanied by music director extraordinaire Raymond Berg on piano and Christian Wheeler on percussion/bass/guitar, the show started with "Gotta Dance" from Singin' in the Rain (natch) and ended with "The Music and the Mirror" from A Chorus Line (double natch). See below for the full song/dance list, including many musical theater favorites. 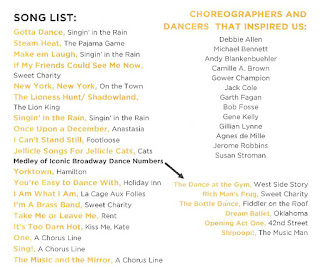 The Ordway's director of education and producing associate Kelli Foster Warder, who also happens to be a talented choreographer (and nominee for a 2019 TCTB Award for favorite choreographer for Theater Latte Da's Chicago), directed, choreographed (along with Joey Miller), and curated (along with Joey Miller and Maureen Sherman Mendez) the show. The result is a really nice flow from song/dance number, to an artist's personal story, to a conversation among the cast. It feels well organized, and also casual, as if we're just sitting around getting to know each other. Each of the artists had a really moving story to tell about their journey with dance and theater, from eating disorders, to lack of family support, to feeling like they don't belong, to feelings of failure. But the one thing they all have in common is the look of joy on their face when they're able to express all of that emotion through dance.

The dancing in this show is absolutely thrilling, and much of it is familiar for someone who sees a lot of musicals (me). When I watch dancing it looks so graceful and effortless, but this show in particular points out the huge amount of effort that goes into a career in dance - not just the training, education, auditioning, rehearsing, performing, but all of the varied emotions that go along with it.

The #TCTheater community is an embarrassment of riches, not only in acting and singing, but also in dance. Thanks to the Ordway for featuring some of that talent in this series and in their original productions on the main stage.