"Chicago" by Theater Latte Da at the Ritz Theatre 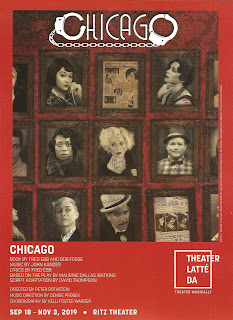 Women in prison, treated unfairly, not given adequate legal representation, having to pay prison staff for favors, immigrant women not provided with a translator, society's glamorizing of crime but disregard for and mistreatment of criminals. No, I'm not talking about the Netflix hit series Orange is the New Black, which just concluded its brilliant seven-season run. I'm talking about the Kander/Ebb/Fosse/Verdon*/Reinking creation, the 1975 musical Chicago whose 1996 revival was even more successful and is still playing on Broadway. This ahead-of-its time musical, about crime, celebrity, and the justice system, only gets more relevant as the years pass, which is perhaps the reason for its long lasting success. Typically a show that is still running on Broadway and touring (it most recently came to Minneapolis last year) is not available for regional productions. But somehow Theater Latte Da snagged the rights and has created their own unique take on this classic. The cast is absolute perfection, the Ritz Theater (which opened in the same era in which the show is set) has never looked more gorgeous and detailed, and this Peter Rothstein directed production brings out all of the glitz, humor, and biting social commentary of the piece, while putting the audience right in the middle of the action. It's absolutely thrilling.

Our two anti-heroines in 1920s crime-riddled booze-filled Chicago are Velma and Roxie, two murderers awaiting trial. Their story is told through a series of vaudeville-style vignettes, performed directly for us, the audience. Velma and Roxie are at odds for most of the show, competing for the attention of slick lawyer Billy Flynn, the public's love, and a trial date. But after they literally get away with murder, they find that their 15 minutes of fame has disappeared, and they finally join forces in the fiercest act yet.**

The Ritz Theater, which opened in 1926, is another character in this show. Since buying the theater a few years ago, Theater Latte Da has made better and better use of it's gorgeous historic bones. Never more so than with this show. Walking into the theater, you can't help but notice all of the details, even in the hallway entrance to the theater, flotsam and jetsam from the era are piled up in the corner. Once inside, the theater itself simply glows with warmth and seedy elegance. A beautiful wooden floor has been placed over the existing stage, including a catwalk that extends through the center of the audience. An additional stage has been built on top that floor, with seating around its edges for 20 lucky audience members. The awesome 5-piece band (about one-third the size of the Broadway production), led by the incomparable Denise Prosek, is set down into the stage in the middle of the action. Stage lights glow around the perimeter, and chandeliers hang from the ceilings and sconces on the wall, alongside probably hundreds of small frames containing historical photos of the era and photos of the cast. These frames cover not just the stage area, but also the side walls of the theater. There so much for the eye to take in. The band begins performing about a half hour before the show, mostly instrumental period pieces, but a few of the cast members also take the stage as we transition seamlessly into the main event at showtime. (Scenic designer Eli Sherlock, lighting designer Mary Shabatura.)

This 13-person ensemble is overflowing with local talent, 11 of whom are making their Theater Latte Da debuts, but many of whom are familiar from other #TCTheater stages. Not new to Latte Da is Britta Ollmann, who has had many memorable performances with Latte Da from Violet to Once. But this may be her best performance yet. She's so incredible as Roxie - brash, confident, sexy, funny, strong, vulnerable. And with her curly blond wig she looks the part of a silent movie film star of the era. Michelle de Joya is equally strong as Roxie's counterpart Velma, like opposite sides of the same coin. Reed Sigmund is perfectly cast and so sweetly sad as Amos, aka Mr. Cellophane. Every celebrity and their brother has played Billy Flynn on Broadway, but we get Robert O. Berdahl, and he couldn't be better as the charming, smarmy, arrogant lawyer. For those of you who were disappointed at how Regina Marie Williams' talent was wasted in Guys and Dolls at the Guthrie this summer, she makes up for it here as Mama Morton, as she gets to use all of her many talents. And everyone in the eight-person ensemble is incredible in multiple roles and deserves to be named - Dorian Brooke, Fernando Collado (who also plays the traditionally drag role of Mary Sunshine, but without the surprise reveal, because this is 2019 and a man in a dress is not a thing to be laughed at), Jaclyn Juola, Joey Miller, Dylan Rugh, Maureen Sherman-Mendez, Elly Stahlke, and Jessica Staples.

If you've seen the Broadway/touring production once or twice (or six times like I have), there's not much to recognize here, other than Kander and Ebb's brilliant score, of course. Peter Rothstein sets this show in a speakeasy rather than a prison, which is reflected in the design as described above. The costumes are also different from the familiar skimpy black numbers. There's more color, pattern, lightness, and variety in this world, but still just as sexy. Lots of lingerie, people who are missing pants, '20s era dresses, and only a minimal use of bowler hats (costume design by Alice Fredrickson). The choreography, created by Kelli Foster Warder, is entirely new too. There are hints of Fosse/Reinking but it's an entirely new thing, full of energy and movement all around the space, perfectly suited to this burlesque/vaudeville/speakeasy world.

Chances are you've seen Chicago before. But trust me, you've never seen Chicago like this. It's super exciting (and rare) that Theater Latte Da was given the chance to re-imagine this classic while it's still playing on Broadway and touring around the country. Peter Rothstein and his team are experts at thinking about music-theater (both new and established works) in new ways that make the audience see it in a new light, and bring out the nowness of even shows that were written 40+ years ago like Chicago. Our celebrity culture, the glamorization of violence and crime, the corruption in prisons, the injustices of the justice system, couldn't be any more meaningful than they are today (except, maybe, tomorrow), and this production grapples with all of these issues in a thoughtful and highly entertaining way.

Chicago runs through November 3 at the Ritz Theater in Northeast Minneapolis. Go for the onstage seating if you're brave enough (don't worry, it's immersive but not interactive, although someone might pour you a drink or pat you on the head).

*If you're interested in the story of how Chicago, and other classic musicals, came to be, and how Bob Fosse was supported in his career by a number of women largely uncredited for their work, including his wife, the Broadway star Gwen Verdon, please watch the excellent and soon-to-be Emmy winning FX series Fosse/Verdon.
**Plot summary borrowed from what I wrote about the Broadway tour last year.