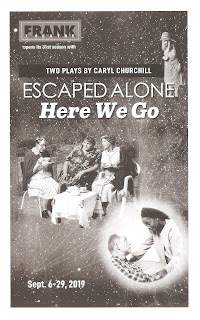 To begin their 31st season, Frank Theatre is returning to one of their favorite playwrights, Caryl Churchill. They're presenting two of the 80-year old British playwright's newer works, the short plays Escaped Alone and Here We Go. I don't know if these two plays were meant to be performed together, but they work very well with each other, dealing with similar themes of aging and death. Director Wendy Knox admits that they are "a couple of weird pieces," but I found them to be weird in a good way, a meaningful way. Odd, perplexing, surprising, funny, charming, sad, poignant, and profound are just a few of the adjectives that could be used to describe these plays. And as always, the audience is in good hands with Frank's excellent cast and design team to lead us through the weirdness to the truth of the piece.

These two plays, each less than an hour long, often feel like more than two plays with their very different and sometimes disjointed scenes. Escaped Alone goes back and forth between four British women of a certain age (Barbra Berlovitz, Cheryl Willis, Janis Hardy, and Maria Asp - all delightful) sitting in a garden drinking tea and discussing everything from the profound to the mundane, and one of the women (Cheryl Willis) stepping out of the scene with some horrifying post-apocalyptic declarations. The dialogue is so fast as to almost be overlapping, but each of the women gets a weighty monologue as well. Here We Go is broken down into three scenes in reverse order: a funeral (with the four actors from the first play plus Charla Marie Bailey), the recently deceased (a riveting Patrick Bailey) arriving in the afterlife, and the slow, wordless, repetitive dance of a caregiver helping a man through his daily routine (performed by the latter two actors). It's a sobering and chillingly realistic end to an at times fantastical journey.

In addition to the very lived in and full performances by the cast, the storytelling is strengthened by the design. The lighting (designed by Mike Wangen) helps with the first play's scene shifts; the set (designed by Joe Stanley) transforms from a sweet and charming garden to a sparse stage to a hospital room; the sound design (by Dan Dukich) creates some haunting and well-placed effects in the afterlife scene (the kind that make you turn around to see where the sound is coming from); and the costumes (designed by Kathy Kohl) encompass the ladies in the garden looks and the elegant funeral wear (with hats!). All elements combine under Wendy Knox's direction to bring these odd little gems to life.

Escaped Alone and Here We Go continue through September 29 at Gremlin Theatre, which, if you haven't been, is a great space with free lot parking right next door to Lake Monster Brewing and food trucks. Your one-stop shopping for the perfect trifecta of beer, food, and theater.