"If the Spirit Moves" by Theatre Elision at Elision Playhouse 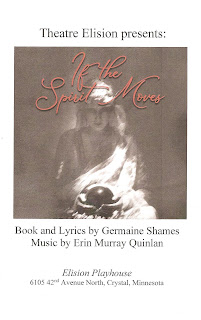 Theatre Elision is opening their third full season in their brand new performance space - Elision Playhouse in Crystal, located just off Highway 100 on 42nd Avenue. It's an exciting development for this newish #TCTheater company that has filled a niche we didn't even know we were missing - small-cast one-act new or rarely done musicals, often with a focus on women creators, artists, and stories. It seems like we always need more performance spaces for the 70 or 80 theater companies in town, so I hope to see other theater companies utilize this space that includes not just a lovely new theater space, but also a roomy, cozy, eclectic lobby that can function as a cabaret space, and rehearsal rooms as well. This summer Elision remounted their first season hit Ruthless! as their first show at the playhouse, but my first experience there was the season opener If the Spirit Moves. This new musical features a story involving WWI, Dada, Spirtualism, speakeasies, romance, grief, and friendship, and a wonderful six-person cast, beautifully and blissfully unmiked in this intimate space. But like all of Elision's shows, this is a short run - only four performances remain this weekend so get yourself to Crystal to check it out!

WWI has just ended, and we follow artist Daphne from Europe back to NYC, where she stays with Desiree, her friend from back home in St. Louis. Desiree changed her name from Agnes and adopted a broad New York accent and flapper girl persona, and instructs the unemployed Daphne that she needs to get a racket. Seances and Spiritualism have become popular, so Desiree decides that Daphne should pose as a medium, to which she reluctantly agrees. Much to her surprise, when the seance starts she becomes possessed by the spirits of the dead - conveniently she is an actual medium! Desiree and Daphne's first three clients are all wealthy society types who have recently lost someone, and receive actual comfort from hearing their loved ones words. Daphne falls for the wealthy but shell-shocked (what they used to call PTSD) Edward, a relationship that's complicated when her German artist friend Kurt shows up. If this sounds like a lot for 90 minutes, well, it is. They don't really delve into anything too deeply, and things are wrapped up neatly, but it's a nice framework on which to hang some lovely songs and great performances by the cast.

Serena Brook is wonderful as Daphne, so natural and likable as this lost woman trying to find her way, but also super fun to watch as she plays all of the spirits and their different accents and mannerisms (utilizing the talent for voice acting she displayed for several years on Live from Here). Christine Wade is a hoot as Desiree, having so much fun with this character that is intentionally an exaggerated version of the type. Kyler Chase and Ben Heer are also great as the love interests, and Abilene Olson and Janet Hayes Trow as a couple of society ladies are so good I wish we got to hear more of them. As I mentioned, no body mics are used in this production, which is so refreshing. I love unamplified musicals, and they're so rare, but this space is perfect for it. The cast sounds clear and gorgeous, accompanied by Elision's resident Music Director Harrison Wade on keyboard.

The cast performs in front of a black curtain drawn across the back of the performance space, sometimes with a few set pieces brought out, and also in Desiree's charming apartment set, revealed when the curtains are pulled aside. This makes for quick scene transitions. The cast is dressed in lovely period clothes (Lindsay Fitzgerald is credited as director and designer).

The new musical If the Spirit Moves continues through September 29 at Elision Playhouse. Click here for info and tickets.