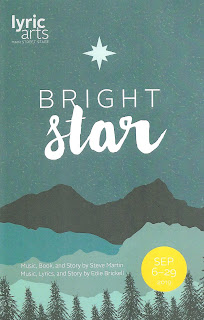 For the second year in a row, Lyric Arts is opening their season with the regional premiere of a new Broadway musical. Last year they brought us a fantastic production of the 2014 Idina Menzel vehicle If/Then, this year it's the 2016 bluegrass musical Bright Star by Edie Brickell and Steve Martin (yes, that Steve Martin). It only ran for a few months on Broadway and didn't win any awards (although it was nominated for several Tonys, including best musical). But it's a sweet story with a gorgeous bluegrass score that perhaps plays better on smaller stages. Like Lyric's Main Street Stage in charming downtown Anoka. The huge and talented cast, along with the fantastic onstage bluegrass band, do a wonderful job of bringing this heart-breaking and heart-warming story to life with all the feels. You can see this regional premiere through September 29.

SPOILER ALERT! Some plot points are revealed below so stop reading if you don't want to know.

Bright Star follows Alice Murphy as a teenager in the 1920s and an adult in the '40s in North Carolina. Back in the '20s, she falls in love with the charming Jimmy Ray, gets pregnant, and has her baby stolen from her by Jimmy Ray's father because he thinks Jimmy Ray's future would be hampered by a wife and baby. In the '40s, Alice unwittingly meets her long-lost son, for whom she's been searching for 23 years, when young vet Billy submits his stories for publication in Alice's magazine. They of course don't recognize each other at first, making the eventual reunion all the sweeter. The narrative switches back and forth between the two timepoints in a way that's easy to follow and makes both stories come alive. It's a frustrating story - a bunch of men tell Alice what to do with her body and her child, Jimmy Ray can't face Alice after finding out what his father did, and the two live separate lives for decades - but the emotions run high and the resolution is (almost) worth the pain inflicted on everyone.

The bright star of Bright Star is the bluegrass score, which not only covers the range from uptempo foot-stomping numbers to gorgeous ballads, but is extremely effective in conveying the aforementioned high emotions. When Alice's baby is taken from her, when Jimmy Ray confronts his father, when the perpetrators express regret, when the long-awaited reunions come, you feel it in your bones. That's the purpose of music in musicals, to make you feel the emotions more deeply than mere words could accomplish, and Bright Star succeeds in this with flying colors. Plus, seeing a banjo, fiddle, and mandolin onstage is a thrill for fans of bluegrass/folk/Americana music, a style not often represented in musical theater.

The relatively simple but effective set (designed by Katie Phillips) is dominated by a wooden porch where the six piece band (ably led by Elise Santa on keyboard) sits. Because of space limitations at Lyric's stage, the orchestra is usually in a room upstairs, piped in, which works fine. But it's so much better when everyone is in the same room, and when the audience can see the musicians. Director Scott Ford has members of his large and talented cast (dressed in period and location appropriate costumes by Samantha Kuhn Staneart) sitting or standing on stage, on the porch or around the perimeter, for much of the action. They watch the scenes play out, which heightens the effect of Alice telling her story, as she sings in the opening number. Choreographer Heidi Spesard-Noble has created some beautiful, flowing movements for the cast, often continued through scene transitions, as another element that helps you feel the emotions of the story. The two and a half hour show flows beautifully.

The excellent cast is led by Katie Strom Rozanas as Alice, who's equally good at playing the young and innocent teenager and the world-weary adult, different but connected enough that you know it's the same person. Alice goes through a wide range of emotions, and Katie authentically conveys them all with her beautifully expressive voice. Her boys are pretty great too, both newcomers to the Lyric Stage. As her teenage love Jimmy Ray, Chris Paulson plays the range from young love to heartbreak, and Cam Pederson has an aw shucks charm as Billy. Other highlights in the cast include the comic duo of Nykeigh Larson and Carl Swanson as Alice's editors ("Another Round" is a musical comedy highlight), Maureen O'Malley with youthful charm as Billy's love Margo, and the trio of dads (moms get short shrift in this story) Peter Aitchison, Robert Zalazar, and Steve Ramirez, conveying their characters' love for their children even when they make bad choices.

Lyric Arts' production of Bright Star is one of four (by my count) regional premieres of recent Broadway musicals happening in Minnesota, but not Minneapolis or St. Paul,  this season. (See also Duluth's Renegade Theater's stellar Fun Home last month, A Gentleman's Guide to Love and Murder at Old Log Theatre in Excelsior in October, and The Bridges of Madison County at Artistry in Bloomington in January.) I commend Lyric Arts for taking a risk on a new work and bringing it to #TCTheater audiences for the first time (the Broadway tour did not come to Minnesota). It's a great choice for them and their stage - a gorgeous sweeping musical with an intimate story, beautifully brought to life by the cast and creative team. More of this please!