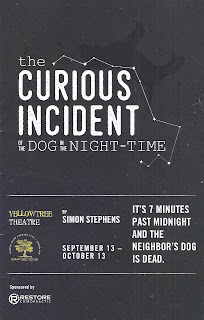 To open their 12th season in an unassuming strip mall in Osseo that belies the charm of the interior, Yellow Tree Theatre is producing the 2015 Tony winning best play The Curious Incident of the Dog in the Night-time, just the second production in #TCTheater. Like the 2017 production at Mixed Blood Theatre, they're utilizing a smaller cast and much fewer hi-tech effects than the Broadway production and tour. A style that perhaps serves this beautiful story, about a differently abled teenager who discovers his own strength, even better. Ellen Fenster (who almost always makes me cry) directs the talented and diverse nine-person cast in this uniquely funny and poignant play.

15-year old Christopher lives in Swindon, England, about 80 miles west of London. The titular incident is when Christopher finds his neighbor's dog murdered, stabbed with a garden fork (which is British for pitchfork). He is greatly disturbed, and vows to find out who the murderer is, even though it means leaving his comfort zone and talking to his neighbors. His mother died two years ago so he lives with his father, who tells him to drop it and not make trouble. But Christopher continues with his investigation, which leads to uncovering not only what happened to the dog, but even more pivotal truths about himself and his family. He successfully travels to London on his own, despite the overwhelming stimuli for a boy with his condition, and eventually returns home to take a special test in maths (which is British for math). Through his adventures Christopher finds that he's more capable than he thought he was, and as able to grow and learn as anyone.*

The story is told through Christopher's school counselor Siobhan (Laura Esping, whom I would like to have as the encouraging voice in my head) reading a book he wrote about his experiences, while we see some of the scenes acted out. There's even reference to the school making his book into a play, which results in some fun fourth-wall breaking and several meta layers of storytelling.* Instead of the hi-tech theater magic, there is lo-tech theater magic, and creative physical theater by the ensemble (Alexcia Thompson, Dylan Ward, Matthew Lolar, Melinda Kordich, and Peter Simmons) as they help create this world and all of the characters in it. The design of the show adds elements of light and sound to represent Christopher's experience in the world, with a heads up for those in the audience who might also be triggered by such things. All of the different locations are represented by the gray boxy set with sliding doors surrounding a patch of green grass. (Lighting design by Courtney Schmitz, sound design by Peter Morrow, projection design by Emmet Kowler, scenic design by Arina Slobodianik.)

Young Zach Schnitzer is fantastic as Christopher, very consistent and believable in the repeated awkward movements and speech patterns of a boy like Christopher, while still portraying the emotions he keeps locked inside. #TCTheater favorite Stacia Rice is a huge "get" for Yellow Tree. She's well cast and excellent in the role of the conflicted mother who's trying to do the best she can for her son. Lastly, Corey Mills is heart-breaking as the father left behind to care for the son he loves but doesn't quite understand. The entire ensemble speaks in varied British accents, which to my untrained ear sound delightful (thanks to dialect coach Foster Johns), and are dressed in modern and character defining clothes, including Christopher's pi and NASA shirts (by costume designer Ash M. Kaun).

On top of all that good stuff, there's something everyone loves - a real live dog on stage (perhaps to make up for the fake dead one at the top of the show). And something only math nerds like myself love - a mathematical proof after the curtain call!

The Curious Incident of the Dog in the Night-time continues through October 13 and is already selling really well (at the very reasonable price of $30 or less per ticket), so make your plans soon to join Yellow Tree in another great season of theater in the 'burbs.

*Some text borrowed from what I've written about previous productions.