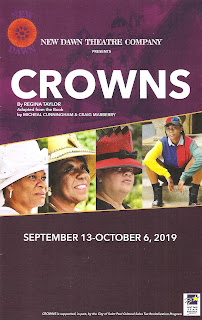 It's a new dawn. A new dawn of theater that lifts up unheard voices and tells untold stories. The newest #TCTheater company, aptly named New Dawn Theatre Company, is here for it, leading the way. They have a company overflowing with talent and an ambitious mission to produce three works each year (a play, a musical, and a devised work) that "are by, for and feature women, minorities and members of the LGBT communities." Their inaugural production just opened at the new Summit Center for Arts and Innovation, a former Summit Avenue church that has been converted into a performance space. It's the perfect setting for Regina Taylor's Crowns, a free-flowing musical piece that explores the tradition of wearing hats in the African American community as it relates to spirituality, history, legacy, and family. Theater is my religion and this is my kind of church - a completely mesmerizing and engrossing piece that takes me to another place as if in a dream.

Based on a book of photography, Crowns does not present a linear narrative, it's more of a stream of consciousness. Our guide through this journey is Brooklyn teenager Yolanda who is sent to live with her grandmother down South after her brother is shot. Yolanda is lost, confused, grieving, and her grandmother, aunts, and other women she meets help her to find her center again. It's like life lessons told through hats. The show is loosely structured as a day in church - from morning prayers, through weddings and funerals, to the evening processional. Adorned in fabulous hats, each of the women tell a story from their experience, whether funny or inspiring or tragic, that teaches Yolanda about where she came from to help her determine where she's going. Through it all she's able to grieve for and honor her brother. It turns out a hat is so much more than a hat.

It should be illegal to have this much talent in one cast, but I'm glad it's not because they are a thrill to watch. Jevetta Steele reigns supreme as Yolanda's grandmother, supported by a bunch of other legendary #TCTheater artists - Aimee K. Bryant, Jamecia Bennett, Shirley Marie Graham, and Thomasina Petrus as the church women and T. Mychael Rambo in all of the male roles. Each one of these performers can bring the roof down on their own, and their combined power, amplified in the large echoey former sanctuary space, is almost too much to bear. The stories are interwoven with gospel music and songs from the African American tradition, music that lifts up the audience as it lifts up Yolanda. Who BTW is played by Valencia Proctor, totally holding her own amongst these legends.

Artistic Director Austene Van directs the piece with dynamic energy and a constant flow of music and emotion. The music sounds gorgeous under Music Director extraordinaire Sanford Moore, although I don't think he's actually in the room, I believe he's currently onstage at the Ordway as Music Director of Smokey Joe's Cafe. I did however see Kevin Washington keeping the rhythm on percussion. In the beautiful converted church, it takes no suspension of disbelief to find ourselves in church with these artists creating this story. And in a show about hats, you need some serious hats, and costume designer Samantha Fromm Haddow delivers. The church women are resplendent in gowns of primary colors, with matching hats, often more than one for each, while in contrast Yolanda looks young and modern and urban.

Crowns premiered in 2002 and was produced at the Guthrie in 2004 (during my first season as a subscriber). In the cast of that production were T. Mychael Rambo, Javetta Steele, and Austene Van, with music director Sanford Moore. It's about time we saw it again in #TCTheater, and it's a perfect choice for the debut of this New Dawn. You, too, can witness the New Dawn Wednesdays through Sundays through October 6 on St. Paul's lovely Summit Avenue.