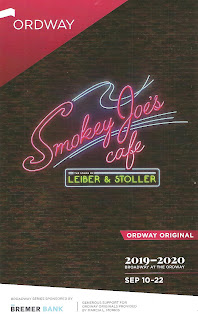 The Ordway is opening their 2019-2020 season with an Ordway Original production of Smokey Joe's Cafe, a musical revue of the songs of Leiber and Stoller. You may not be familiar with those names, but you are definitely familiar with at least one, if not dozens, of their songs. They wrote over 70 hit songs, mostly in the '50s, recorded by a multitude of artists including Elvis and The Coasters. About 40 of these songs were compiled into a musical revue that debuted on Broadway in 1995 and ran for five years. To my knowledge, it was last seen in #TCTheater in the early aughts at the Hey City Theater (where Brave New Workshop is now), a production I saw and loved. The show was recently revived Off-Broadway, and the Ordway smartly brought in the director/choreographer Joshua Bergasse and some of the design team to recreate the show in St. Paul featuring our amazing local talent. The result is a fun and highly entertaining evening of beloved music brought to life by talented local artists.

What I love about this musical is that it doesn't try to create some silly story to tie all of the songs together with cheesy dialogue (i.e., the jukebox musical). In fact there's no dialogue at all, just 90 continuous minutes of music. But the fun thing is that each song is a mini story unto itself (as good songs are, and these are good songs). The staging by director/choreographer Joshua Bergasse creates a sense of relationships among the cast as they're telling these separate little stories in each song, that together combine to form a loose story of a group of old and new friends hanging out at a bar. No words needed, other than Jerome Leiber's clever lyrics combined with Michael Stoller's catchy tunes. Especially in the hands of this crazy talented nine-person ensemble who are not just amazing singers and dancers, but also storytellers.

The ensemble sings solos, duets, in small groups, and as one big group (with some gorgeous multi-part harmonies), giving the songs and relationships many different dynamics. Including Ben Bakken's trademark rocker wail on songs like "Ruby Baby," China Brickey's comic styling in "Don Juan" and others, Dwight Leslie's energetic performance of "Jailhouse Rock," Emily Scinto's lovely and plaintive "Falling" and mesmerizing shimmying, Jorie Ann Kosel's beautifully sad story "Pearl's a Singer" and deliciously evil "Trouble," Kevin Brown Jr.'s sweet duets with Emily and powerfully gut-wrenching solo "I Who Have Nothing," Rajané Katurah bringing the house down several times including on "Hound Dog" and "Fools Fall In Love," Rendell DeBose's charm as he frequently takes lead in the quartet including the hilariously expressive "There Goes My Baby," and Shavey Brown thrillingly deep voice in group numbers and fun solo turn in "Little Egypt." This cast is an embarrassment of riches.

There was a time when I listened to the 1995 Original Broadway Cast Recording obsessively, so I did notice a few new songs, a slightly changed up order of songs, different people singing different songs, and some new arrangements. But not so much as to be unrecognizable, only enough to keep it fresh while still sounding like those great old songs we all love. Music Director Sanford Moore (who also music directed the Hey City production) leads the onstage seven-piece band and keeps the music rolling straight through (including a few lovely a capella moments). The band even gets their center stage moment, literally, as their platform rolls out to the middle of the stage for the dueling pianos of Sanford and Raymond Berg. Other instrumentalists get their time onstage too in various songs.

The set from the Off-Broadway production was brought in and adapted to the Ordway stage (including, I suspect, the addition of the Hamm's beer sign). The two story set looks like a warm and welcoming bar that I would love to hang out in (in fact some onstage audience seating might have been fun). Local costumer Jeni O'Malley makes everyone in the cast look great, mostly with just one look but with jackets and other pieces to add and subtract for variety.

While this show may just be song after song after song, it's far from monotonous. The entire space is used well (including the aisles of the theater), and many different combinations and permutations of cast and band are used throughout the night. The Ordway Original Smokey Joe's Cafe is a celebration of beloved mid 20th Century American pop music and a showcase of incredible local talent. Catch it in downtown St. Paul through September 22 only!