"Bone Mother" by Sandbox Theatre at the Museum of Russian Art 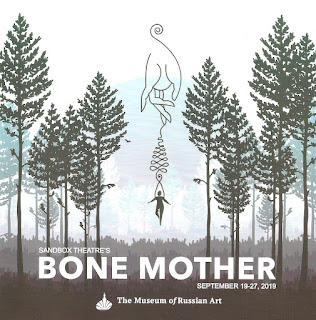 Combine Russian folk tales, aerialists, music, theater, and a unique space and what do you get? Sandbox Theatre's latest uniquely beautiful creation, Bone Mother. The devised theater company recently started an offshoot called Swingset for aerial works, which takes their ensemble driven, innovative, physical theater style and lifts it up in the air. Literally. This piece about Russian folk tales is appropriately staged in the Museum of Russian Art in South Minneapolis (I didn't know it existed either), conveniently located just off 35W. The museum is in what used to be an church designed to look like the Alamo, and I hope to go back and visit it again, because the performance doesn't really allow for much viewing of art. But in the meantime, go and enjoy this entirely new and unique way of telling these ancient and familiar tales.

I say familiar not because I'm an expert in Russian folk tales. But familiar in a way that every culture's folk tales feel familiar in an archetypal sort of way. Bone Mother tells the story of Baba Yaga, the archetypal witch/crone/wise woman figure, in three parts. We first meet her through the young girl Vasilisa, who goes to visit Baba Yaga after her beloved babushka (grandmother) dies. She learns a few lessons and returns home completely changed, in the usual hero cycle sort of way. Parts two and three see Vasilisa visit the old woman as an adult, and later as an old woman herself. Through these journeys Vasilisa grows into herself, more confident and strong despite what the townspeople may say about her "strange" ways. Until she makes the ultimate transformation to take her place in the world.

The five ensemble members (Carolina Gwinn, Chasya Hill, Heather Stone, Henry Ellen Sansone, and Megan Campbell Lagas) take turns playing Vasilisa, Baba Yaga, and other characters in the folk tales, including a very cat-like cat (played by Henry). Impressively, four of these artists were beginners on the silks when they started this project, and now they all fly like experts (with some really beautiful and very high movements by Carolina, the experienced one). The aerial work is fun and playful and really adds to the storytelling. Co-directors Evelyn Digirolamo and Danielle Siver balance all of the storytelling elements well.

One of those storytelling elements is the music, composed and performed by a quartet comprised of Anna Johnson, Emily Kastrul, Sarah Larsson, and Willow Waters. They play multiple instruments and not only perform songs (that the ensemble sometimes joins in singing), but also a constant musical soundscape, at times dark and creepy, at other times light and playful. Most of the musicians have a background in Eastern European folk music, which adds to the authentic feeling of the piece.

The piece is performed on a corridor stage, with just two rows of audience on either side of the long narrow performance space. Three emerald green hanging silks are the only set pieces, and performers are literately just a few feet, or even inches, in front of you. The costumes (designed by Mandi Johnson) appear to be yoga clothes with added appliques, so that they're functional for all of the aerial work, but still appropriate to the world of the folk tale with the mysterious symbols and patterns.

Unfortunately there are only six remaining performances of this show, and several of them are sold out already, so make your plans soon if you're interested in seeing this melding of art forms into one cohesive and entirely new retelling of these old stories. Click here for more info and tickets.