"The Glass Menagerie" at the Guthrie Theater 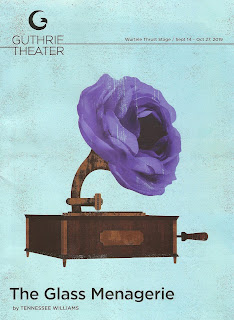 Long before I became a Twin Cities Theater Blogger, I became a Guthrie season subscriber. The decision to accept that telephone offer to see five shows for $100 changed my life. As a Guthrie subscriber, I began to see more than just the touring musicals and an occasional local show. I started to know and follow the local community of theater artists, I was introduced to other local theaters. The more local theater I saw, the more I found to see, and it continued to snowball until I just had to start writing about it. I'm now entering my 17th season as a Guthrie subscriber, and my 10th season as a #TCTheater blogger. How fitting to begin this milestone year with one of my favorite playwrights and one of my favorite plays. I first saw The Glass Menagerie at the Guthrie in 2007 (not counting when my high school did it), first wrote about it in 2010 at the Jungle, shortly after I started blogging, and have seen and written about it multiple times since. The Guthrie's new production, directed by Artistic Director Joseph Haj, is just as lovely, sad, and wistful as any I've seen.

The Glass Menagerie is the original memory play, and Tennessee Williams' most personal. The character of Tom (aka Williams himself) begins by telling us about the story we're about to see, and then steps inside it, as if stepping into his memories and reliving them, but with the wisdom and regret that comes with age and knowing how things turned out.

A mother and her two adult children live in a small apartment in St. Louis in the late 1930s. Tom dutifully supports the family by working at a shoe factory, where he feels stifled and bored with life. Laura has a slight physical impairment that has caused her to become reclusive, wanting nothing more than to stay in the apartment, listen to records on the Victrola, and arrange her glass figurines, her menagerie. Their mother, Amanda, is constantly nagging her children - telling Tom how to chew his food and how to sit at the table, cajoling Laura into leaving the house to attend business school or entertain a "gentleman caller." She's a stereotypical fading Southern belle, who talks constantly of her glorious past and happy youth; she performs a memory play of her own for her children. She wants Laura to be as popular as she was, but Laura is nothing like her, and the time and place they live in is nothing like the one in which she came of age. The situation turns tragic as the gentleman caller experiment fails miserably, Tom leaves the family to find his fortune in the world, and Laura is left with her glass menagerie.*

Despite the fact that I would have liked to see more local actors in the cast, this four-person ensemble is excellent. This is really Tom's story, and Remy Auberjonois (a NYC actor who I believe is based locally now) is truly wonderful. His is the older, wiser Tom, still believable as the restless young Tom, but we never forget that this is a man reliving his memories. Memories that are sometimes sad, sometimes unbearably beautiful in the - you don't know how good things are until they're gone - sort of way (see also,Our Town). At particularly poignant moments, the lighting changes, and there's a look on Tom's face almost as if he's trying to freeze the moment, not quite ready to let it go yet. Carey Cox understudied the role of Laura in the recent Broadway production, and we're lucky to get to see her play it here. Not only is it refreshing, nay, necessary, to see an actor with a disability on stage, rather than an able-bodied actor fake a disability on stage, but she also gives a heart-breaking and empathetic performance. Jennifer Van Dyck is a force of nature as Amanda Wingfield, strong and funny and exasperating as she relentlessly badgers her children, but always out of love for them. Rounding out the cast is Grayson DeJesus as the carefree, cocky, and charming Jim O'Conner, aka the gentleman caller, upon whom all of the family's hopes are hung.

The design of the show puts us squarely inside a memory. From the wistful musical soundtrack (called for in the script, composed for this production by Jack Herrick), to the dozens of little glass light bulbs hanging from the ceiling that lower and light up as the mood calls for it. In certain scenes, shadows are cast on the back wall, almost providing a second scene to watch. The set is dominated by a fire escape that extends endlessly up, as if in a dream. The look of the show is completed with modest period costumes of a working class family of the era, the exception being Amanda's frilly debutante gown from her younger days. (Scenic design by Mikiko Suzuki MacAdams, costume design by Raquel Barreto, lighting design by Christopher Akerlind, sound design by Darron L. West.)

The Glass Menagerie is a theatrical play that doesn't pretend to be reality, but an experience of memory and emotion. As Tom tells us, "I give you truth in the pleasant disguise of illusion" - my favorite description of this thing we call theater. It's also a fine example of the idea that the more specific something is, the more universal it is. This play is very specific to Tennessee Williams' own family life, but is universal in that feeling of painfully beautiful nostalgia for things long gone that live on in our memories, if altered by time. The play is filled with such poetic language and clearly drawn characters that are lovably human despite their flaws. It really is close to the perfect play, and this production does it justice.

The Glass Menagerie continues on the Guthrie's thrust stage through October 27.