"Ride the Cyclone" at Jungle Theater 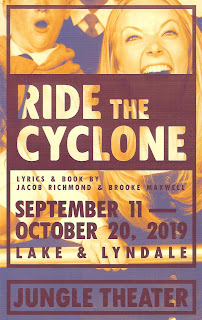 "This is the most wonderfully weird musical I've ever seen and the cast is perfection. I wish I could see it again and again and again!!" Last night's Insta story exclamation says it all. Jungle Theater's production of the fantastic musical Ride the Cyclone, a Canadian import that played Off-Broadway three years ago, is hands down one of the best things I've seen this year. I don't know what kind of warped and brilliant minds creators Brooke Maxwell and Jacob Richmond have that caused them to write a musical about teenagers dying on a roller coaster, but I love it. Not only is it one of the most unique musicals I've ever seen, but this production by the Jungle simply couldn't be better. In addition to this stupidly talented cast that plays their roles to perfection, every element of design is spot on and combines to create this warped carnival after-life world. If you're a fan of new and original music-theater, Ride the Cyclone is a must-see.

It's no spoiler to tell you that a group of kids from a choir in the small town of Uranium City, Saskatchewan (wow, it's a long time since I've had to spell that word) die when the roller coaster car they're riding in goes off the rails at the highest point, hurtling them towards their death; it happens in the first five minutes of the show. But it's what happens after that, in the space between life and death, that's the bizarre and brilliant thing about this musical. The six teenagers are told by Karnak, one of those creepy carnival fortune teller machine thingies, that he can bring one, and only one, of them back to life. So begins the competition, with each of them pleading their case in song. Which is another great feature of the musical - there is no star, each member of the cast gets their moment at center stage. And each person's song is so weirdly specific that we know exactly who they are, and love them for it. I know, I know, this sounds like a weird premise for a musical, but trust me, it works.

A big reason why it works so well is this incredibly talented cast. Starting with Jim Lichtscheidl as Karnak, who does all of his acting sitting in a box, speaking and moving robotically as he explains the situation to the audience and the kids. There's no one I'd rather follow into this warped world. Each one of the six actors playing the competing teenagers is so brilliant in their role, so committed to the very unique and specific character they're creating. Becca Hart gives an out of this world performance that looks more marionette than human, her beautiful soprano voice ringing out as she floats around the stage. Gabrielle Dominique is charming and adorkable as my favorite of the kids, the follower Constance who finally finds her voice. Speaking of finding their voice, Jordan Leggett is a joy as the sick-on-earth Ricky who really comes alive after death. Josh Zwick gorgeously becomes Marlene Dietrich in his character Noel's fantasy song, while the always dreamy Michael Hanna boils over as the rageful and passionate Ukranian Misha. Last but certainly not least, Shinah Brashears is an absolute delight as the overachiever and wannabe leader of the group, Ocean.

But it's not just the cast that's perfection, so is the design, every element coming together to make this wonderfully weird world. Chelsea M. Warren's set is a shabby chic faded carnival (with a well utilized spinning floor). Marcus Dilliard's dynamic lighting design creates some cool effects. Sean Healey makes everything sound great, with Music Director Mark Christine's awesome four-piece band piped in from backstage. Trevor Bowen's costumes start out as simple school uniforms and transform into something more during the song/fantasies. Paul Bigot's wig and makeup design make Becca Hart almost unrecognizable. And let's not forget Kathy Maxwell's projection design, with videos and photos (including adorable pics of all of the actors as kids) play on the curtain in the proscenium within the proscenium. And did I mention the choreography?! Our Karnak, Jim Lichtsheidl, does double duty and has created some fun, fast, energetic, and super cool choreography for this exuberant cast to dive into.

Reading the program after the show, I was delighted to read Artistic Director and Director Sarah Rasmussen's (without whom none of the above happens) note, in which she compares Ride the Cyclone to the classic play Our Town. I had the same thought watching the show, perhaps because Our Town was fresh in my mind, having just seen Artistry's lovely production two days earlier. It may seem like an odd comparison, but both shows have a moment when a character realizes the almost unbearable beauty of life only after they've left it. In their death, these characters can finally appreciate their lives for all they were. If only stories like this could help us remember to appreciate life while we're in it (aka "no day but today").

This magical Ride continues Tuesdays through Sundays through October 20. If you like fun, energy, originality, and awesome performances, you should probably see it.