"Gloria: A Life" at the HERstory Theatre 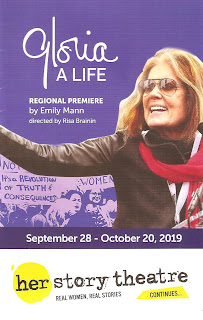 The History Theatre is continuing their successful spring of bringing us women's stories written by women into their new season. Their first HERstory play of 2019-2020 is Gloria: A Life, a new play (seen Off-Broadway just last fall) in its regional premiere. Friends, this show is more than just theater. It's the celebration of a movement that changed the world, and has a long way yet to go! After the 80-minute first act in which we learn about the history of the Women's Rights movement through the life of Gloria Steinem, the "second act" is a talking circle. In one of the best post-show discussions I've ever experienced, women (and a man or two) in the audience shared their inspiring stories too. I like that they call it the second act of the play, because it really is an important part of Gloria's story, in which the conversation that was started on stage is continued into the audience and into our lives. Gloria: A Life is another educational, entertaining, and inspirational experience from the HERstory Theatre.

The play is constructed as Gloria telling her story directly to the audience, while we see select scenes acted out. From her early days as a journalist, to the infamous Playboy Club story, to her awakening to feminism and the founding of Ms. magazine, right up to today. We learn about the brave and strong women who fought for the rights that we now enjoy, including the women of color with less famous names that Gloria learned from and worked with, like Florynce Kennedy and Wilma Mankiller. We learn about the women today who are continuing that fight, including a record number of women elected to Congress in 2018. The past, present, and future are all intermingled on that stage. The future is represented by us, the audience, as we also get to join the conversation, and the movement.

Risa Brainin directs this all-female cast that feels like a group of sisters telling their stories, supporting each other. With the trademark hair and glasses, #TCTheater favorite Charity Jones embodies the icon and the woman that is Gloria Steinem. She's so disarming and personable as she speaks directly to the audience, also conveying Gloria's struggles and humanity in the challenges of her life. Charity is surrounded by a terrific ensemble of diverse women (Cathleen Fuller, Dana Lee Thompson, George Keller, Jamila Joiner, Katie Bradley, and Lolly Foy) who aid in the narration and play all of the characters in Gloria's story. They also sing a little, and the a capella "We Shall Overcome" was the most poignant moment in the show for me, as many women around me, who were there in the early days of the fight, joined in unprompted.

The History Theatre's thrust stage is the perfect setting for this play; it is already arranged in a sort of circle. The performance space feels homey and welcoming, with rugs covering the floor, surrounded by benches and books. Images and videos from the past and present are projected onto a screen at the back of the stage, which really grounds this story in reality. The story spans several decades, and the basic modern costumes transform to different eras or characters with the addition of a scarf, jacket, or wig, or a complete change. And get there early for the awesome feminist pre-show playlist, which continues throughout the show, including Lizzo's "Like a Girl," which even pop music ignoramus me recognized. (Scenic design by Joel Sass, video design by Miko Simmons, costume design by Amelia Cheever, sound design by C. Andrew Mayer.)

Gloria: A Life feels like a special event at this moment in history. On opening night, my congressperson Betty McCollum introduced the play, and the special guests of the talking circle (different at each performance) were Minnesota feminists and representatives of ERA MN Rosemary Rocco and Betty Folliard. The audience was filled with women (and men) who lived this history, and young people learning about it for the first time. On the one hand it's a little depressing to recognize that we're living in one of the backlash times, but also hopeful because it feels like we're on the cusp of further progress. How can we not be with all these smart, talented, amazing women working together?!

Gloria: A Life continues through October 20 at the History Theatre in downtown St. Paul.