"Jimmy and Lorraine: A Musing" at Pillsbury House Theatre 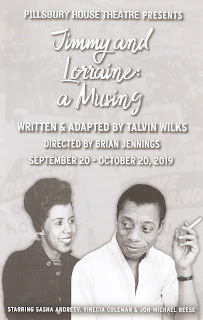 I couldn't describe Pillsbury House Theatre's Jimmy and Lorraine: A Musing better than playwright/adapter Talvin Wilks does, calling it "a meditation on the American political climate of the late '50s and '60s through the lens of two significant artists of the time, James Baldwin and Lorraine Hansberry. Following their impactful careers as artists, their call to social activism and the challenges of wrestling with the balance of an artistic career and politics, their lives give us an opportunity to look at this rich period of political and social upheaval." This is a brilliantly constructed 90 minutes of theater that gives us a clear picture of these two artists/activists in all their complexity, with much (or all?) of the text coming from their own writings. It's really quite impressive how Talvin cobbled together all of these different sources to form a cohesive and dramatic story, like the most complicated jigsaw puzzle coming together to form a picture that was always there. A picture of a very specific time in America that still resonates today.

This play is like one long conversation between Jimmy and Lorraine, in which we get to know them not just as artists and activists, but also as humans and friends. I have to admit I didn't know much about them as artists (Hansberry is of course most well known for being the first female black playwright produced on Broadway with 1959's A Raisin in the Sun), and nothing about them as activists. It's quite fascinating to hear their ideas on the Civil Rights movement and how they used their art to further the cause. They also had some very famous friends in the entertainment and political worlds, who are part of the story as well.

Lest you think this play is a boring recitation of prose, let me give you three examples of particularly ingenius scenes:
All three of these scenes are so different from each other stylistically, but so brilliantly express the ideas in a novel way that's absolutely captivating.

Connecticut based director Brian Jennings directed the premiere of this play, and has come to Minneapolis to direct this production as well. It's a complicated piece with the many character, location, and tone shifts, but this production flows beautifully. The three-person cast is truly exceptional. Vinecia Coleman and Jon-Michael Reese are both fantastic as the title characters, so believable in their humanity and strength. Sasha Andreev convincingly plays multiple characters, including Lorraine's husband, Jimmy's lover, and a Kennedy or two.

The design of the show is as exceptional as the cast. Everything is in shades of black, gray, and white. The backdrop is comprised of large squares, some of them covered in typewritten pages, with a desk on either side of the stage for the two writers. Some of the squares open to reveal props or a bar, and projections of historical and contemporary images and videos play across the surfaces. Characters are dressed in crisp and classic period clothing in the the same color scheme. (Set design by Leazah Behrens, lighting design by Michael Wangen, sound design by Katharine Horowitz, projection design by Bill Cottman, costume design by Trevor Bowen.)

Jimmy and Lorraine: A Musing continues through October 20. If you go (and you should), not only will you learn about these two influential artists and how their lives and work intersected with the Civil Rights movement, but you'll also likely be entertained and surprised by the unique structure of the play, and impressed by the performances of the cast and contributions of the entire team to create this powerful piece of theater.