"The Winter's Tale" by Ten Thousand Things at Open Book 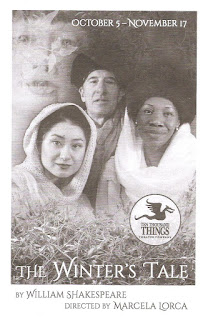 Last night I posted on Instagram: "I know nothing about this play, but there's no one with whom I'd rather experience Shakespeare for the first time than @ttttheater." As it turns out, I have seen The Winter's Tale before, but it was eight and a half years ago and I had no recollection of it. Certain plot points did seem a little familiar, but I thought that was because Shakespeare tends to mix and match a finite selection of elements in his plays. No matter, the sentiment still holds: Ten Thousand Things does Shakespeare like no one else, making it accessible and understandable and relatable, whether you're familiar with the play or it's your first time (or you just have a really bad memory). Their production of The Winter's Tale opens their 2019-2020 season and goes from devastating to delightful in the space of two hours. Artistic Director Marcela Lorca (who took over the reigns from founder Michelle Hensley last year) directs this wonderful nine-person ensemble that combines TTT faves and TTT newbies to form an expert storytelling troupe. This is a story of hope, forgiveness, repentance, and the healing nature of time.

The two distinct acts of the play (in TTT's edited roughly two-hour version) take place 16 years apart and in different countries. In the first act, King Leontes of Sicilia for no apparent reason flies into a jealous rage and accuses his wife Hermione of having an affair with his good friend, the visiting King Polixenes of Bohemia. Tragedy ensues (this is the devastating part) and the first act ends with lots of death and the queen's newborn daughter abandoned. The tone shifts to delightful as we take up the story 16 years later, the abandoned princess now a shepherd's daughter in love with the Bohemian prince, and much reconciliation to make amongst the various parties.

Everyone in the ensemble plays multiple characters (and maybe also a bear), and they're all so playful in typical intimate TTT "All the Lights On" style. Steven Epp plays Leontes and is alternately terrifying and empathetic (with an amusing turn as a shepherdess in the second act). Shá Cage takes Queen Hermione through the full range of emotion, from love to confusion to betrayal to forgiveness. James Craven is the stately King Polixenes, and William Sturdivant is eminently watchable as the King's right hand man Camillo and the clownish shepherd's son. Mo Perry brings dignity to the role of the Queen's friend who argues for mercy, with a completely different air of silly humor as a shepherd. Stephanie Bertumen and Christopher Jenkins are utterly charming as the young lovers, TTT fave Karen Wiese-Thompson is as hilarious as always as a dishonest peddler, and Cristina Florencia Castro makes the most of many small roles.

As always, Ten Thousand Things performs in a small square on the floor surrounded by a few rows of chairs with no tricks of lighting and very minimal sets and costumes. But what there is in terms of design is quite charming. Sonja Berlovitz's costumes are deceptively intricate, with details of beautiful fabrics shared across characters, with gowns, jackets, and tunics worn over basic white shirts and khakis. Nick Golfis' set pieces are just a few signs, benches, and stools, but with little touches that convey a sense of place. And of course, no TTT show is complete without the rich soundscape created by resident Music Director Peter Vitale. As a bonus, this show also includes a few little tunes (composed by JD Steele) sung by the ensemble.

Ten Thousand Things continues taking their delightful production of The Winter's Tale to various locations around town for free and paid performances (at Open Book in Minneapolis and North Garden Theater in St. Paul), including a final stop in Red Wing. Click here for details, and make your plans to experience Shakespeare by #TCTheater's best interpreters of Shakespeare.