"Ordway Cabaret: Back to Before" at the Ordway Center for Performing Arts 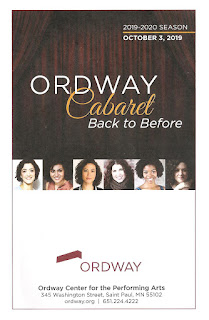 The third installment of the Ordway Center for the Performing Arts' Ordway Cabaret series brought together some of the most talented women working in local music-theater. In addition to singing a wide variety of songs from the musical theater canon, they each shared personal stories about being a woman working in music-theater, and the depiction of women in the past and present of musical theater. I'm loving this new series (similar to the Ordway's former series, Broadway Songbook, but more personal) because it allows us to, as director Kelli Foster Warder said in her pre-show talk, celebrate these songs and musicals that we love, and still critique them in terms of how they speak to today's world. And let's face it, some of our most beloved classic musicals are real problematic when it comes to their depiction of women (e.g., Guys and Dolls) and people of color (or lack thereof). The 2018 hit Minnesota Fringe show Not Fair, My Lady! tackled this issue heads on, and Back to Before (a lyric from a song from Ragtime) continues that theme on a bigger stage. For this show, the Ordway appropriately brought together not just an all-female ensemble (including one of Not Fair, My Lady!'s creators, Colleen Somerville), but also an all-female team behind the scenes. Several of the women commented that it was their first time working on an all-female team, which is pretty astounding. But also perhaps a sign of things to come. The world has changed in the last few years, and "we can never go back to before."

This one night only event (with an audience that was much smaller than it deserved, although plenty enthusiastic) featured the talents of Ann Michels, China Brickey, Christina Baldwin, Colleen Somerville, Meghan Kreidler, and Traci Allen Shannon, all fabulously talented women I've had the pleasure of seeing on stage many times. But never all together, and never in so personal a show. Each of them had the opportunity to tell a story from their experience, whether it's being the only woman in the room when creating a work of theater, or not seeing herself represented on stage, or longing to play deeper and more challenging roles than the ones typically offered to women.

Between the stories, the women sang songs from musical theater - both the problematic ones, urging us to really listen to the lyrics, and the ones with more depth, meaning, and agency for the women singing them. Everyone in the ensemble had the opportunity to showcase their incredible talent in a few solos, but the highlights were when they sang together, from "Dreamgirls" to "Mama who Bore Me" to "Defying Gravity." Other musicals sampled include 9 to 5 (requesting a local production of that one), Something Rotten, A Little Night Music, Grey Gardens, Fun Home, and many more.

The women were accompanied on piano by music director and arranger Julia Thornton, who is based in Seattle. I wondered why they didn't have a local female music director, but then I realized that there aren't that many. The most prominent of course is Denise Prosek, who is currently on stage at the Ritz leading Theater Latte Da's fabulous production of Chicago. There are of course others, but most local music directors are men. Which is something Julia (who BTW is super talented, and even got to sing a few songs herself) talked about, as well as other statistics about how women are underrepresented on and off stage.

I don't see the next Ordway Cabaret on the schedule, but I'll be sure to let you know when I do. It's a must see for people who love musical theater, and also want it to be better.