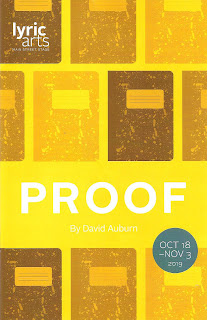 The 2001 Pulitzer Prize and Tony Award winning play Proof comes to Lyric Arts' Main Street Stage in downtown Anoka. David Auburn's play stands the test of time; it's relatable and moving not just for math nerds like myself (the title refers to a mathematical proof, among other things) but for everyone going through the human experiences of grief, loss, love, mental illness, and identity crisis. It's really a family dramedy, set in the world of Chicago academic mathematicians. An excellent four-person cast and detailed design bring out all the nuances in this beautifully written play. It officially opens tonight and runs for just three weeks, so act quickly to see this fine production of a 21st Century classic.

The following plot summary is borrowed from what I've written about previous productions, and contains a few spoilers:

Proof tells the story of a young woman named Catherine whose father, a renowned mathematician, has just died. She took care of him in the final years of his life as his mental health deteriorated. In that time he filled 100 notebooks with gibberish, or is it mathematical genius? Similar to the movie A Beautiful Mind (based on the biography of mathematician Jon Nash), he sees patterns and codes everywhere, and it's difficult to decipher the difference between madness and genius. One of his former students, Hal, comes over to the house to go through the journals to see if there's anything of value. At the same time, Catherine's sister arrives from New York and tells her she's sold the house, and wants Catherine to move to New York with her. When Hal discovers one beautiful, complicated, ground-breaking proof, Catherine says that she wrote it. No one believes her since she's had little schooling; she dropped out of college to take care of her father. It's obvious she has inherited her father's mathematical skill, but has she also inherited his mental illness? That's the question that Catherine struggles with as she tries to figure out who she is without her crazy genius father to take care of and define her life.

Lyric's Resident Director Matt McNabb guides the four-person cast through all of the emotions, with moments of humor nicely balanced with devastating drama. Tara Schaefle, whom I've previously only seen in musical theater roles, is just as expressive without music, as she digs into the depths of Catherine's emotional journey with alternating fierceness and raw vulnerability. Warren Sampson portrays her father (in flashbacks) as a lovable eccentric, then descending deeper into his illness. Also great are Mike Swan as the charming grad student Catherine falls for, and Kate Beahen as the concerned yet somewhat clueless and selfish sister. This play is a series of mostly two-person scenes, plus a few three-person scenes, and all combinations of the four really work, with relationships that feel authentically messy.

The two-story brick facade of a house dominates Lyric's stage, but on second look it's more than just a facade. The inside of the house is visible through doors and windows, like a whole world of detail that we can't quite see but makes the environment richer, deeper, and more authentic. All of the scenes take place on the back porch and leaf-strewn lawn of the home. Though the play was written in 2001, this could very easily be the present, with some use of cell phones, and modern clothing appropriate for academics and funeral attendees. (Scenic design by Mark Koski, costume design by Kathleen Martin.)

As a math and theater nerd, I like to refer to Proof as my second favorite math play (the first being, of course, Tom Stoppard's Arcadia). But of course it's not really about the math. Proof is a play about people grappling with the very stuff of life - who and what to trust, the ever evolving parent-child relationship, mental illness vs. creativity, what to make of one's life. It's smart, funny, moving, well-written, and beautifully brought to life on Lyric Arts' stage.