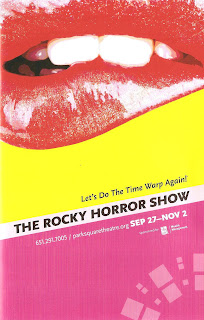 The Rocky Horror Show is an experience. Although it was a stage show first, it's mostly known as the 1975 movie thanks to the cult popularity of midnight showings, complete with audience participation. This popularity informs the live shows, as evidenced by the opening night crowd of Park Square Theatre's new production, which was the most vocal and involved theater audience* I've experienced in many years. They knew what to yell when, and many of them had purchased the "participation packs," available for $5 at concessions, with newspapers and rubber gloves and other things I don't get. As someone who's never attended one of those midnight participatory movie showings, although I have seen the stage show twice before, I sort of felt left out of the joke. Camp isn't really my thing, and The Rocky Horror Show is full on camp, so I wasn't as into it as many of the people around me. But there's no denying the talent and commitment of the cast, and the love-bordering-on-obsession people have for this show.

For the uninitiated, The Rocky Horror Show is inspired by science fiction and horror movies of the early to mid 20th Century, and features a clean cut newly engaged couple, Brad and Janet. Through them, we experience the world of Frank-N-Furter, a self-described "sweet transvestite from Transexual, Transylvania" (which, it turns out, is a planet) when their car is stranded near his mansion. It turns out to be a bit of a house of horrors, as Frank has created a creature named Rocky (a la Dr. Frankenstein and his monster), and sometimes people who show up at the house don't get to leave... alive. But Brad and Janet survive this wacky trip, although not unchanged as they become immersed in Frank's world.

The talented ten-person ensemble really commits to the campy nature of the show, and sing their faces off on this pop-rock score. Gracie Anderson totally owns the role of Frank-N-Furter (more on that casting choice a bit later), both vocally and performance-wise (quite a change from her last role embodying American's sweetheart Rosemary Clooney). Talented young actors Ben Lohrberg and Natalie Shaw are both great as the sweet and innocent Brad and Janet. The always wonderful Sara Ochs, although underused, has a fun turn as Dr. Scott. Rush Benson couldn't be more perfect as the beautiful creature Rocky, and Ricky Morisseau is a fun host/narrator. Having played the role in all three productions I've seen in the last 10+ years, Randy Schmeling is once again creepy good as Riff Raff. Rounding out the strong cast are Cameron Reeves as Eddie, Celena Vera Morgan as Columbia, and Hope Nordquist as Magenta (see above about face singing off).

Music director Andrew Fleser leads the five-piece onstage band, all dressed up and part of the show. They're on the top of the two-level set, with stairs to climb and poles to slide down. The set and costumes have all the trashy chic glitz of a B movie (set design by An-Lin Dauber, costume design by Rebecca Bernstein).

The role of Frank is typically played by a man (most notably by Tim Curry in the original stage production and the movie), or in the case of the recent TV movie, a transgender woman. This is the first time I've seen a cisgender woman play the role of the "sweet transvestite." Director/choreographer Ilana Ransom Toeplitz notes in the program that "'because we've always done it that way' is one of the most toxic sentences in today's language" and "nobody is going to benefit from watching a man do a Tim Curry impression in a pair of cheap heels and fishnets." I'm still unclear the reason for the casting choice, and what it means in the context of the show. Obviously our language and understanding of gender fluidity has changed greatly in the last 40+ years, and it seems like a modern production of this show could (and should) explore that, but I don't think this one really does that.

If you're a fan of The Rocky Horror Picture Show and everything that goes along with it, you're sure to have great fun at this live production of the cult hit. If not, well, just note that this is different and weirder than most theater experiences. Which can be a good thing.

The Rocky Horror Show continues through November 2 at Park Square Theatre's main stage in downtown St. Paul (for something different, also check out the funny, moving, and very human play Aubergine playing in their downstairs theater).

*Sometimes audience participation goes to far, like when an audience member gets out of their seat, wanders the aisle, and harasses other audience members. Note to Park Square: please have trained ushers or other staff available to deal with such situations quickly and efficiently, as was not my experience on opening night.