"The Hollow" by Trademark Theater at the Tek Box 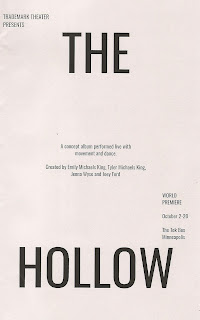 New #TCTheater company Trademark Theater's newest creation The Hollow defies categorization, defies description really. They call it "a concept album, performed live on stage, combined with movement," but that doesn't quite capture it. It's a dreamlike mesmerizing journey of music, dance, emotion. The 75 minutes fly by as you're swept up in this thoughtfully created piece. The music, the dance, the lighting, the costumes, the performances, all beautifully combine in this lovely, unique, and moving work of art.

The Hollow has been in development for three years and gone through several different iterations, until the creators landed on this final form. There's no clear narrative, no set plot, no defined characters. But it still tells a story in the emotional journey of the characters - just don't ask me to describe it.

The original music was composed and is performed by Jenna Wyse and Joey Ford (of the band Tree Party, whom I know from Live Action Set's The 7-Shot Symphony). The program includes a booklet of the song lyrics, so you can peruse the poetic lyrics if you don't catch all the words. Joey plays the electric guitar, Jenna the base guitar, and they're joined by Marcus Bohn on percussion and Matt Silverberg on marimba, with backup vocals by Annie Schiferl, Antonia Perez, and Jennifer LeDoux. It's a unique and lovely combination, sometimes loud as a rock band, sometimes a soft and tender ballad.

The movement was created and is performed by Emily Michaels King and Tyler Michaels King (Trademark's Artistic Director). You might have seen Emily in her stunning solo show at the Minnesota Fringe this summer, and you might have seen Tyler in, well, everything. They move beautifully together, sometimes with perfect unison, sometimes antagonistically against each other. They begin the performance dressed in identical outfits (black pants and black shirt with an open back criss-crossed by thin straps). They move as one, almost indistinguishable from one another. In the second act they dance separately (she in a floaty flowy gauzy black dress, he in a coordinated shirt), including solos for each. Finally they come back together again, dressed in simple white tunics with gold trim. Together they create some shapes and moments that are exquisitely beautiful. But the performance is not just with their bodies, as amazing as that is (there's one segment where they jump continuously for what feels like at least ten minutes, talk about a high intensity cardio workout!). The emotion of the story they're creating can also be seen on their faces as they experience the full range of human emotion, clearly evident by their expressions of face and body.

Every element of production and design is obviously very well thought out and contributes to the whole: the aforementioned costumes (designed by Sarah Bahr); the lighting that creates shadows and other cool effects that heighten the emotion (designed by Karin Olson); the sound that fills the small room with music (note: they do offer earplugs if desired, but for the most part it's not too loud) or silence or the sound of heartbeats (designed by Kevin Springer); even the staging, which at times sees the musicians come down off the stage and sing into mikes hanging from the ceiling.

The three full productions by Trademark Theater have all been so different - an original musical adaptation of Robin Hood, an original two-person play about this divided world, and now this original music-dance piece. That's exciting in a new company, to show so much breadth and variety of work. They've got a few other interesting pieces in the works, but first - The Hollow continues through October 20th at the Tek Box in the Cowles Center for Dance and the Performing Arts.