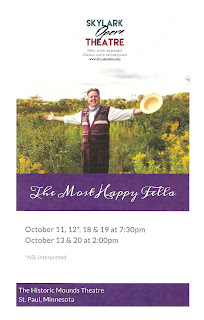 This fall, Skylark Opera Theatre brings us Frank Loesser's The Most Happy Fella, which is technically a musical, but one with operatic qualities to some of the music. And the fact that some of the songs are in Italian (or mixed English and Italian) also make it feel a little like an opera. It's an unabashedly romantic old-fashioned love story, but not without a few modern tweaks. Skylark's production in St. Paul's Historic Mounds Theatre is charming, intimate, engaging, and gorgeously sung by the 12-person cast.

The Most Happy Fella is not produced nearly as often as some of Loesser's other works (e.g., Guys and Dolls and How To Succeed In Business Without Really Trying), but the score is perhaps his loveliest. My only experience with this show is a staged reading by Second Fiddle Productions four years ago, at which time I summarized the plot thusly:

The Most Happy Fella is a love story, if a bit of an unusual one. It goes something like this: boy meets girl in a San Francisco restaurant and leaves her a tie pin and a love note instead of a tip, girl doesn't remember boy but begins a correspondence with him, boy is afraid girl will reject him so he sends her a photo of a younger boy, girl agrees to marry boy and arrives at his Napa farm, girl is disappointed that boy lied to her and has a dalliance with the younger boy, boy and girl fall in love, girl finds out she's pregnant with younger boy's baby, boy is crushed but ultimately decides he loves girl and accepts the baby as his own. A little convoluted, but it's actually a very sweet love story.

The show is performed on the Mounds Theatre proscenium stage, as well as a catwalk that extends into the audience, with seating facing both at an angle. Stage director Bob Neu makes great use of this space; it feels almost immersive, as the music is coming from all around you. In this intimate space no body mics are required (which I think are used less often in opera, but almost always in musicals), so the audience has the rare treat of hearing these gorgeous voices unamplified. Accompanied only by two pianos (Paul Kovacovic and music director Carson Rose Schneider), the sound ranges from sparsely beautiful, to lushly full.

Bill Marshall is wonderful as Tony (the older boy in the story), and in fact also sung the role in Second Fiddle's reading. He speaks and sings in Italian-accented English with some Italian mixed in, and is just so warm and believable as this kind and happy fella. He's well matched in Sarah Lawrence, who sings beautifully as his Rosabella. Justin Spenner brings charm and a bit of danger to the role of Joe (the younger boy in the story), and KrisAnne Weiss is strong as Tony's sister Marie. Laurel Armstrong and Phinehas Bynum could not be more delightful in the secondary romance between a couple of Texans named Cleo and Herman, and will make you smile as much as Herman is accused of doing. They're backed by a fantastic six-person ensemble playing all of the other people in this world, and singing some gorgeous harmonies. The cast also performs Jennifer Eckes' charming choreography that takes them all over the stage and catwalk, while dressed in sweetly rustic '50s era costumes (designed by Samantha Fromm Haddow).

The most well-known song in the show is "Standing on the Corner," usually followed with the lyric "watching all the girls go by." It's a song everybody knows, and it's a fun song, but looked at by today's standards it just brings up that all too familiar experience of being a woman walking down the street and ogled by men. I guarantee you every woman has experienced that, and it's extremely unpleasant, even dangerous. Skylark has made a few small changes that make a world of difference. The word "girls" is replaced by "crowds," and the song is sung by two women and two men. Now instead of a creepy harassment song, it's a fun and flirty song about people of all genders watching and appreciating people of all genders.

The Most Happy Fella has only six total performances, so act fast if you're a fan of classic musicals done well in an intimate environment.